"It's true, the circuit has only ever existed to pacify an angry and hopeless population." - Yuma

The Open Circuit is a TV company which operates on the neutral planet of Gardenia, employing approximately half of its population. Various television shows are created on set and watched by a live audience, some of whom are highly critical of the performers. The main building is situated within a large compound surrounded by a wire fence. A changing room can be seen in Saga: Volume Four  where the actors go to change clothes and prepare for their next show.

In Saga: Volume Four, The Open Circuit plays a key role within the narrative; Alana works there as an actor under the alias "Zipless" in order to generate an income whilst the Rocketship is stationed on Gardenia. Despite being lucky enough to find employment on a foreign planet, Alana is still dissatisfied with her salary and demands a raise from her boss. After spending significant time there, she eventually becomes frustrated with her situation and can only cope with her job by taking a hallucinogenic drug called fadeaway, supplied by the scenery artist, Yuma.

Later, Dengo arrives at The Open Circuit with Prince Robot IV's son taken hostage; he demands to have access to the public broadcast in order to criticise the state on live television. His request is denied, causing the volatile robot to lethally shoot two members of the Circuit. Yuma was badly wounded by the gunshot but remained alive after striking a deal with Dengo so he'd save her life.

The OC's Role on Gardenia

It soon becomes clear that The Open Circuit's main function is to distract the citizens of Gardenia from the horrors of the war between Wreath and Landfall. The trivial, superficial television shows displayed on the Circuit enable people to tune out and save themselves from focusing on the conflict. "Citizens finally had the luxury of concerning themselves with matters beyond life or death." However, Gardenia is in a unique position because of its neutrality within the war; other planets may find themselves tangled in the mess of fighting as opposed to having the time to dedicate towards the relative insignificance of TV. Furthermore, The OC also employs approximately half of the Gardenian population; without such a thriving business operating on the planet, many people may struggle to make ends meet. Even if the OC appears to be providing trivial entertainment, its impact upon people's lives cannot be understated. 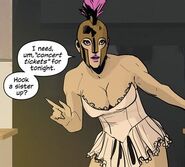 Yuma
Add a photo to this gallery
Retrieved from "https://imagecomics.fandom.com/wiki/Open_Circuit?oldid=68514"
Community content is available under CC-BY-SA unless otherwise noted.