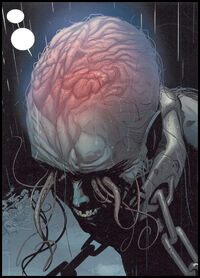 Long ago, the woman known as both the "Lady" and the "Oracle" was captured and tortured by the Four Horsemen, War, Famine, Conquest and Death. The four ripped out her eyes and left her chained naked in the dark at the bottom of the world for undisclosed reasons.

In recent times, Death left the company of the others and fell in love with a woman, Xiaolian and they had a son together. The baby was abducted by their enemies and Death came to her for information on how to find his son. However, in order to gain her services, he had to sacrifice something, she ripped out one of his eyes and used it to replace one of her missing eyes.

Retrieved from "https://imagecomics.fandom.com/wiki/Oracle_(East_of_West)?oldid=62600"
Community content is available under CC-BY-SA unless otherwise noted.