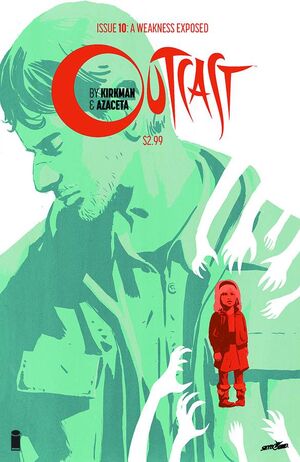 Appearing in "A Weakness Exposed"

Plot Synopsis for "A Weakness Exposed"

Kyle Barnes freaks out about Sherry passing out. Reverend Anderson tells him that they saved her by exorcising her.

Sidney stops by Brian's house. When he learns the Reverend stopped by he becomes upset. He tells him that he'll take care of them.

At the hospital, the Reverend gives his statement on what happened to Sherry to officers. Her father and mother suddenly comes storming into the building. They kick the officer out and thank the Reverend for finding their girl in time before she got hurt.

Reverend and Kyle take off in their car. They argue about whether Sherry is better off in a comatose state. Kyle eventually storms out of the car and walks towards Allison's house. Allison spots him and talks to him about their past. She tells him they had it all until the 10 minutes where he was choking his daughter. They kiss in a passionate moment and then Allison pushes him away. She tells him to leave or she'll call the police.

In Rome, West Virginia as the Reverend walks towards his house, Sidney stood him and asks for a moment of his time.

Retrieved from "https://imagecomics.fandom.com/wiki/Outcast_Vol_1_10?oldid=45324"
Community content is available under CC-BY-SA unless otherwise noted.