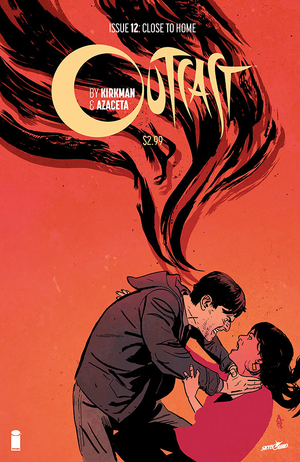 Appearing in "Close to Home"

Plot Synopsis for "Close to Home"

Mark Holt breaks into Megan Holt's room upon hearing noises. He finds her bent over and growling as she is now possessed. She leaps at him and Mark falls backwards and knocks his head against the wall. She slams his face against the ground and headbutts his nose with her head. Holly Holt enters the room upon hearing the noise and clutches her stuffed animal tight as she witnesses her mother's behavior. Megan turns towards Holly and lurches towards her.

Elsewhere, Kyle Barnes eats cereal in his home. He recalls when he was strangled by Donnie. Megan breaks into the room and smashes a light over Donnie's head. He asks her if she wants to be with a looser like Kyle and put her life in danger as he leaves. Kyle feels horrible about his actions as he embraces with Megan.

Kyle's thoughts are interrupted when Mark knocks on the door. He brings Holly in and tells Kyle about Megan's strange behavior.

At the Reverend's home, Reverend Anderson prays to God for strength to battle what's coming. He asks for a sign and suddenly hears a knocking at the door. Kyle tells him they need to help Megan. On the drive over, he begins to tell the Reverend about his new theory. He believes the longer someone is possessed, the stronger hold they have over the person's body. He can't explain why his mother was able to be exorcised but Blake was not. He wonders if he gives the person strength to help fight off the demons.

They arrive at the Holt household. They enter Megan's room. The demon addresses them and Anderson addresses Megan separately from the demon. The demon tells them there are many others as they prepare for The Merge and they can't be stopped. Kyle allows Megan to tackle him and holds his palm up to tell the Reverend to let it happen. When she sucks energy out of him, he attempts to reverse the process and suck power out of her. When he passes out, the Reverend pulls him out of the room.

In the hallway, Kyle says he was able to briefly reverse the process. He demands to stop this demon invasion from happening as he doesn't want anyone to be hurt again.

Our second story arc draws to a close as things spiral even more out of control. Kyle’s attempts to set his life straight seem to just keep pulling him deeper and deeper into darkness.

Retrieved from "https://imagecomics.fandom.com/wiki/Outcast_Vol_1_12?oldid=45326"
Community content is available under CC-BY-SA unless otherwise noted.