"From the Shadows it Watches" 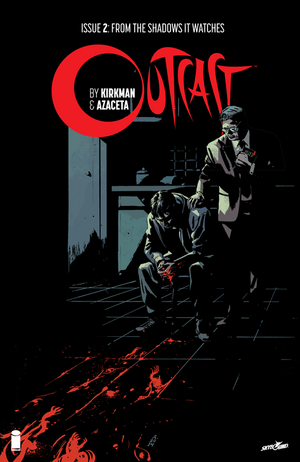 Appearing in "From the Shadows it Watches"

Plot Synopsis for "From the Shadows it Watches"

Kyle visits his mother in the hospital. She lies comatose hooked up to various medical machines. Kyle sits down and begins explaining how he helped save a little boy recently. He thinks about how when the possession happened with her, he didn't want to save her because she abused him as a child.

Meanwhile at the church, Reverend Anderson gives a sermon about temptation and how important to recognize you are not perfect. A man walks into the back of the room and throws Reverend off his groove.

Kyle takes out the trash and begins to clean his house. He finds a tooth that was knocked out of his mouth by Allison when she was possessed. He suddenly hears a knocking at his door and finds Reverend Anderson has stopped by. Kyle asks him for a ride into town and the Reverend agrees. On the drive, Kyle asks if he's seen Joshua. The Reverend informs him he saw him at the service that morning and he was doing well. The Reverend thinks back to the man he saw at the service earlier. He asks Kyle to tell him if he sees anything out of the ordinary. Kyle is confused as they arrive in town as he's not sure what the Reverend meant. As he gets out of the car, he thanks him for the ride and heads to the mechanic shop. Mark Holt watches him from a distance.

The two head to a bar to grab a drink. Kyle tells Mark that Donnie was with Megan a month before he arrived. He said her parents where clueless to what was going on. Mark asks Kyle how he could beat his daughter and wife. He says he didn't beat his daughter but declined to respond on Allison. He decides to leave.

A man visits Sarah on the hospital. She tells her it's sad that she will lose her son to them anyways. 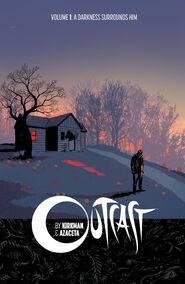 Retrieved from "https://imagecomics.fandom.com/wiki/Outcast_Vol_1_2?oldid=45329"
Community content is available under CC-BY-SA unless otherwise noted.