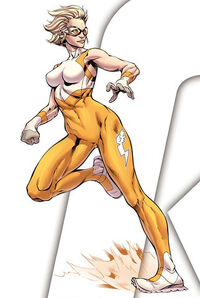 Outrun was selected to become a members of a new globalized version of the Guardians of the Globe by Cecil Stedman anlong with El Chupacabra. To better get acquainted with her new teammates Brit introduce the two to Zandale Randolph a casual setting at a gallery showcasing some of his pornographic art. Upon seeing Zandale's work, Qutrun wished to purchase one. One her first mission with the Guardians, she helped them fight against Gorgg and evacuated the members of the Wolf C.O.R.P.S.. After their attempts to subdue the giant failed, Outrun ran to Salisbury Palin where she met up with Cecil, Bulletproof and Yeti to relocated the stones from Stonehenge and use them to imprison the giant.

Shortly after her introduction to the world as a member of the Guardians, the Order led by Set began to launch a series of coordinated attacks all across the world. Outrun with Brit and Bulletproof fought one agent named Slaying Mantis in Madrid and the two were rendered unconscious. As part of Brit's orders to better combat the supervillans, Outrun was station in London with Bulletproof and Kaboomerang, where she attempted to flirt with the former only for the artist/hero to turn her down as he was already involved with someone.

After Cast Iron was killed by the Order, due to El Chupacabra's drunkenness causing him to be kicked-off the team Outrun located him at a bar drowning in his sorrows. The female hero offered to drink with him an also even help him forget.