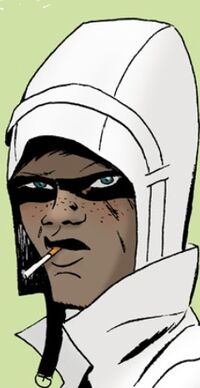 P.I. is an illegal paparazzi who uses his Investigation skills in exchange for money. He lives in a futuristic Los Angeles where everyone had all their information leak when the cloud burst occurred. As a result, nearly everyone hides their identity. P.I. hides his identity, burnt his finger prints of with acid,[1] and doesn't have drivers license to stay off the government grid.[2] He prefers to work with high-money cases as his work is highly illegal.[3]

When he was a young boy, PI one day helped his mom put on a lewd costume before heading to a function where she didn't want other work members to recognize her. On her way, she was hit by a car and died.[4] At his mom's funeral, a man with a dreamcoat approached him and caused PI to wonder if it was truly his dad.[5] PI was then raised by Gramps when his dad left.[6]

Working as a PI

PI began work as an unlicensed journalist out of the Public Notary. He took photos of Leanne Chester G., a previous lover of Leanne's who could not let go even though he had a family. He returned to his office and was approached by Taj McGill to dig into her past. However, he suddenly received a call from Gramps.[3]

PI rushed home to explain to Gramps, who was rambling, that the cloud which used to house everyone's information burst. There was no privacy any more and it tore everyone apart.[3] He then met up with Melanie. He told her to head to Taj's place to begin research on her. PI arrived at the Carlyle but found his client was already dead. He returned to grab Melanie and leave. She insisted they stay to research who had killed her. When he refused, she left him stranded in anger.[2]

PI returned to his Public Notary office and was suddenly attacked by a maked assailant. He overcame her and disabled her Nym. He wasshocked to find it was Raveena McGill, Taj's sister. She demanded that he works for her now and would find her killer or else she'll reveal his identity to the Press. Suddenly, two men break into the room through the windows and they murmur French while pointing their guns at them.[2]

They both fired bullets at the two where one took off PI's middle finger, and the other appeared to hit Raveena McGill in the face. As the Frenchmen investigate, Raveena strikes back and they realize they had only knicked her ear. PI distracted the other Frenchman by beating him with the phone and then tackled Raveena so the two flew out through the window. They jumped on a bus and headed to Gramps', who used to practice medicine. They agree the best was to track their attackers was to find where they bought their gas masks, which were considered rare.[4]

On Rodeo Drive, PI and Raveena McGill checked out a high-end Nym shop. PI told her they only took cash so it would be a good place to start looking for the Frenchman's gas masks. PI inquired with the sales associate if she will give him the identity of the person who bought their last masks. The lady working instantly detects he's illegal paparazzi and tells him to buzz off.[7]

Elsewhere, the two try to think up new leads. Raveena tells PI the only place her sister hung out was Los Angeles Public Library. She was concerned the records are so private they'll never know what she was looking at. PI told her they'll need to find a naughty librarian.[7]

They head to C.G.'S home who was having dinner with his family. PI told him they need his help since he worked at the library. He then blackmails C.G. and offered to give him his ex-girlfriend's info if he helped. C.G. agreed to sneak him into the Library after hours to research Taj's search history.[7]

Later at the Los Angeles Public Library, they began hacking into the search history database when a fellow Librarian, Ashleigh, called C.G.'s office. She was looking for her glasses and told him she was coming up to look. PI ordered C.G. to stall her as Raveena continued her download. PI called Melanie to help them escape. While initially uninterested while she eats at McDonald's, when he tells her it's a getaway, Melanie leaps into her car excited for action.[7]

Ashleigh burst into the room. Raveena thew a blunt information tube at her while PI punched C.G. into her. They escape to Mel's car, who was wearing a McDonald's mask. Raveena reviewed the search history and noticed she started studying political science instead of communications. She started after looking into Khalid DeGuerre's auto biography. When the Press attempt to pull them over for speeding, Mel guns it and they end up in a wreck.[7]

At Gramps' house, PI and Raveena discussed Taj's research. They decided since all roads lead to Khalid DeGuerre, they should track him down. They headed out to meet Star Maps, a P.I. specializing in celebrity private investigation. He told them he knew where DeGuerre lives but would need PI's Dreamcoat in exchange. When they refused, he says he would do it only if PI kisses him like he used to. PI quickly laid a kiss on Star Maps. Maps told them they needed to head to the Tubes which was where he spent his nights.[6]

Later at the Tubes, PI and Raveena snooped around for DeGuerre. When Raveena was mistaken for Taj by a masked man, the man realized his mistake and took off. They caught up with him and removed his Flatex skin. He told them he used to meet with Taj and discuss bringing back the internet.[6] PI and Raveena McGill interrogated the man further. The sessions were lead by DeGuerre. He also told them a man named Nebular went there and he lived in Santa Monica.[8]

PI and Raveena discussed the internet coming back. Raveena said it wouldn't happen as people wouldn't have computers. Suddenly, they both realized everyone had a TeeVee in their home. They arrived at the Wonderwall, a huge wall engaging Los Angeles. PI and Raveena broke into Nebular's apartment.[8]

When Nebular and DeGuerre arrived home at the same time, they broke out on a motorcyle in an attempt to escape. When Nebular and DeGuerre are following close behind, Raveena delivers a buckshot to DeGuerre's face and they escape. They returned to Gramps house and showed him the depowered iPad they lifted from Nebular's apartment.[9] When the news arrive, they slip out the back. PI and Raveena ate at a restaurant while the iPad charged. When it came on, they opened a folder called K.D. which they believed stood for Khalid DeGuerre. They found blueprints for a large rocket. They wondered if he would try and re-launch the internet. PI told Raveena the only place they'd be able to store something that large was at the old airport.[10]

Raveena and PI track down DeGuerre and his missile. Raveena emerges from an elevaor where she found DeGuerre. DeGuerre quickly grabbed Melanie and held her as a shield. He admitted that he killed Taj and told Raveena that she hated what the world had become.[11] Suddenly, the elevator opened again and Nebular walked out. He knocked Raveena out with the but of his knife. When DeGuerre approached, Nebular lunged at him with the knife and stabbed him. Nebular took his mask off to reveal it was actually PI wearing Nebular's Nym. As DeGuerre bled out, he told them the launch codes had already been entered. PI told him that he had smashed the controls. DeGuerre laughed and told him he only smashed the controls to the lift. The rocket would still launch the internet.[12]

At the wall, the rocket took off. Raveena grabbed Melanie and they dove out of the way as PI was caught in the blast. After the smoke cleared, they spotted PI hanging on to the rubble. After the rocket exploded, a tidal wive swept over the rubble.[13]

Years later, Raveena took up the job of PI as a Private Investigator.[13]

Retrieved from "https://imagecomics.fandom.com/wiki/P.I._(The_Private_Eye)?oldid=50615"
Community content is available under CC-BY-SA unless otherwise noted.