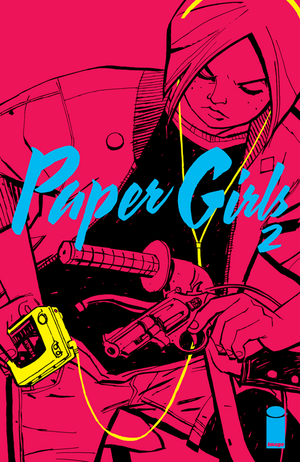 But like we say in the Scouts, "Be prepared."

The robber continues to run through a village that looks exactly like Stony Stream. A "Vur Vur" sound is heard as a winged creature descends upon the man and snaps his head like a grape between his powerful jaws. It grabs the walkie talkie the man had stolen.

Elsewhere, Erin returns home with the other paper girls. They are shocked that they cannot find an adult anywhere and Stony Stream has become a ghost town. Mac wonders how they can worry about the small things when monsters are running around the town. Erin fires back that he wasn't a monster, probably just a man with a skin disease. Suddenly the walkie talkie makes a noise. They panic as to what to do. Mac attempts to call the police but there is no dial tone on the phones. Mac proposes to head to her house as her father has a gun they could use to protect themselves. Erin freaks out and reminds them that the newspaper told them they aren't the news, they are to report any issues to an adult. Mac reminds her that all the adults have left and they are on their own.

They head out on their bikes to Mac's home together. As they read, they talk about whether the robbers were really monsters or not. Erin wonders if they're from a lot farther away as she pulls out the Apple product and asks them if they think they're form the future where machines have shrunken in size. Suddenly, they spot a werewolf standing in the middle of the street. Tiffany says she believes it is Wallace Bund, a boy in their school who just recently purchased that same werewolf mask. As she approaches, he remains still. The girls warn her to turn back but she presses forward. When she is about to rip his mask off, the "Vur Vur" sound returns. They look up to find dinosaur-esqe birds circling them in the sky. The same ones that had attacked the robber earlier. They decide to split and when they look back to where Wallace was, nothing remains. As if he disappeared.

They take off on their bikes to get to Mac's home which was close by. They crash upon arriving as they are all exhausted. Mac pulls out a gun and tells them they should always be prepared as she learned in girl scouts. Suddenly, Mac's mom, Alice Coyle, enters the room drunk. She tells them the end of the world has arrived and the dinosaur creatures are demons. She then tells them that Mac's dad disappeared into thin air once the creatures arrived. Tiffany recalls how Wallace disappeared. Alice then begins talking about the bible and pulls out a gun. She pulls the gun to her head and Mac dives to stop her. A loud bang is heard as the paper girls are shocked at what transpired.

The hottest new ongoing series of the year continues, as the Paper Girls witness the impossible.

Retrieved from "https://imagecomics.fandom.com/wiki/Paper_Girls_Vol_1_2?oldid=48096"
Community content is available under CC-BY-SA unless otherwise noted.