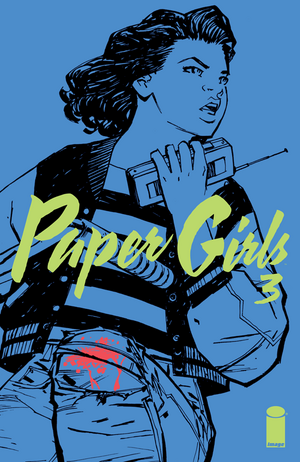 No, you guys said it... and I'm a crappy listener

On a football field, Terry stands in awe as a gigantic rift in the sky lets loose flying dinosaur creatures. Gabrielle comes running out telling him her friends just disappeared and she doesn't know what's going on. Terry makes a pass at her and tells her he's loved her for a long time. She rejects him and tells him she doesn't love him that way.

Suddenly, a dinosaur rider lands in front of the two teenagers. He pulls out a staff and blasts them with a purple energy. They both disappear as he speakers a jumbled language.

Meanwhile at Mac's home, the gun shot has just fired off. They girls initially all seem okay but when they see Erin's shirt, they realize she's been shot. They talk about rushing to the hospital but Alice Coyle mysteriously vanishes. The twelve year olds discuss how to get Erin to a hospital and Tiffany offers to drive. They discuss leaving the gun behind as they don't want to get hurt while Mac urges them to bring it for protection.

Minutes later, they're rushing to the hospital in a station wagon. The walkie-talkie comes on and they can hear a garbled speaker.

Elsewhere, the ninja teenagers find their friend that head his head chopped off by a dinosaur earlier.[1]

Erin begins hallucinating about not having friends and being buried in schoolwork. The girls suddenly hit the breaks as a man with a staff stands in front of them. When he realizes they don't speak his garbled language, he pulls out a translation stone and suddenly speaks English. He tells them it's dangerous to be out during the Ablution. He tells them he'll escort them to safety but is suddenly shot in the head by the ninja teenagers. They remove their masks to reveal they are mutated teenagers.

The ongoing mystery series from BRIAN K. VAUGHAN & CLIFF CHIANG charges ahead, as the girls have a close encounter with an unexpected visitor.

Retrieved from "https://imagecomics.fandom.com/wiki/Paper_Girls_Vol_1_3?oldid=54199"
Community content is available under CC-BY-SA unless otherwise noted.