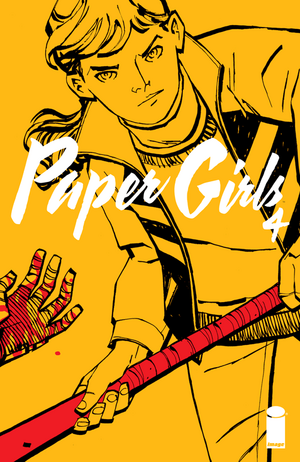 I didn't murder anyone. I executed an evil son of a bitch.

A man and woman find their troop murdered from the crew earlier. They track the girls.

The two teenagers that encountered Erin and her crew lead them through the sewers. They explain that in this time, thirteen, things are different and that they are infected. He suddenly realizes the translation stone he was using to communicate was giving the Editrix their location.

Heck, one of the two boys, smashed the translation stone he was using to communicate with the girls in their native language but it was too late. The crew was attacked by a large eye-ball shaped object that was using the translation stone to track their location. It grabbed a hold of Tiffany and she began to have flashbacks to wasting her life playing video games. Naldo, one of the teenagers, shot the eyeball and the crew escaped into the forest.

K.J. realized they were near the old country club, and then immediately became self-conscious that the other girls would look down on her for having money and covered it up saying she was only going to have a party there. They arrived at the teenagers ship. They thought the boys were going to heal her but they suddenly transported away leaving them stranded.

What lurks beneath the streets of Stony Stream?

Retrieved from "https://imagecomics.fandom.com/wiki/Paper_Girls_Vol_1_4?oldid=54246"
Community content is available under CC-BY-SA unless otherwise noted.