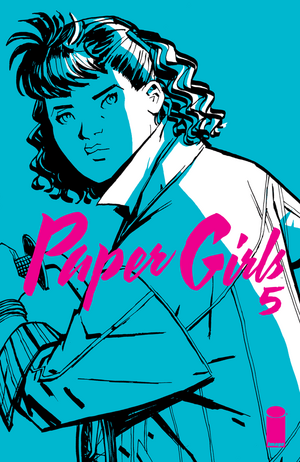 My name is Erin Tieng, I deliver newspapers.

Erin wakes up in a strange facility. Heck and Naldo inform her she is being fixed by futuristic bugs in their Whenhouse. Erin looks down and spots several dozen bugs swarming around her gunshot wound, repairing her. They tell her that they are scavangers and have stolen most everything in the Whenhouse. They suddenly come under fire from the old-timers. They attempt to quickly jump to her hometime in 1988.

Elsewhere, Mac, Tiffany, and K.J. decide to head back to the basement where they originally had found the time machine. They believe they may find Erin back there. They are suddenly approached by a dinosaur flyer and its master. K.J. hold her gun to the dinosaur and the rider agrees to surrender. She gives them her weapon. Mac grabs it but accidentally fires it and knocks the female rider out. They take off.

The woman rider and calls into Grandfather. She requests they be tried as adults for assaulting her as opposed to teenagers. Grandfather denies her request and tells her to bring them in.

Elsewhere, Erin wakes up from being healed again. Naldo and Heck tell her they agreed to help her since she reminded them of themselves. Willing to do anything to get ahead and survive. They die and the doors open. She emerges and finds her three friends who had been waiting for her in the basement of the place where they originally found the spaceship.

Erin emerges and tells them there was a leak that killed the two teenagers. They hear a sudden noise from outside as the Grandfather requests they come out from the house. He tells them the teenagers fancied themselves as Robin Hoods, but stealing from the past to fund the future. Rather than give up, she clutches the iPod she got earlier as the ship explodes.

They find themselves transported to 1999. Another girls named Erin Tiend claims to be the Erin Tiend of the group.

END OF STORY ARC! The first arc of the smash-hit ongoing series concludes with major revelations and another game-changing cliffhanger.

Retrieved from "https://imagecomics.fandom.com/wiki/Paper_Girls_Vol_1_5?oldid=55406"
Community content is available under CC-BY-SA unless otherwise noted.