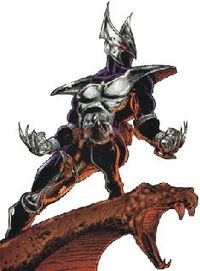 Paul Johnstone is a superhero bent on saving those who have wrongs forced upon them. He unofficially first appeared in Malibu Sun free promotional magazine (May, 1992).

Paul Johnstone grew up as a troubled youth in Harlem, New York. He avoided a life of crime due in part to the encouragement of a man named Richard Woodroe, who was originally assigned as a caseworker to Paul when he was caught stealing.

Eventually Paul became a lawyer and, beyond that, a district attorney. Dealing with various criminals, he eventually encountered a group of mobsters who put pressure on him for some undisclosed reasons. After Paul's refusal to back down from them, he ended up the target of an assault intended to serve as an example to others who got in the way of these mobsters. This incident culminated in his attackers injecting him with HIV-infected blood.

After the encounter, Johnstone was left uncertain regarding whether he had been infected or not. The attack had been made public and word of his possible infection spread through Johnstone's workplace, making it a very inhospitable environment to be in. Tensions between Johnstone and one of his co-workers led to an altercation between the two which landed Johnstone out of a job and in jail.

After he was released Paul received medical confirmation that he was HIV positive. He descended into a depression while in the hospital. During this time he resolved that he would use the rest of his time to dispense justice to individuals who preyed on innocent victims. One of his friends, a cop named Christina Reid, was also in the hospital and came to visit him. She informed Paul that she and a man named Carlton Sun had been developing an exo-skeleton suit of armor that could help aid him in accomplishing this task.

Johnstone decided to don the suit, christening himself "ShadowHawk" after his favorite superhero (a name that would eventually lure out the psychotic and racist villain Hawk's Shadow, who believed he was the one entitled to bear the mantle of ShadowHawk), and was taught how to fight effectively with the help of Christine. Johnstone also kept the pills needed to slow his reaction to his HIV infection in small pouches on his belt so he could take them as needed.

Early on, ShadowHawk's actions against criminals were brutal. He would break their spines, leaving them to be discovered by police with no indication that he had attacked them other than hearsay from the criminals. This led to ShadowHawk garnering a reputation as an urban legend as well as being hunted by both criminals and law enforcement alike.

Later in his career (and as his lifespan shortened due to the progression of HIV), Johnstone eventually grew to be less violent. He would also spend a majority of his remaining time searching either for a cure to his infection or another way to extend his life. This led to encounters with the likes of Supreme (in which a battle would ensue, leading to the discovery of ShadowHawk's true identity to the world), the WildC.A.T.s. (who offered a possible solution involving a robotic body to transplant Johnstone's consciousness into - which would ultimately fail to work) and Youngblood's Chapel (another hero also infected with HIV).

In his final act as ShadowHawk, Johnstone rescued his mother from being attacked by Hawk's Shadow. The aftermath of the fight left Johnstone in a weakened state and unable to elude the pursuit of the police. He was remanded into custody and transported to a hospital where the HIV eventually took its toll and ended his life.

ShadowHawk will be made as an action figure in series 1 of the new toy line Indie Spotlight by Shocker Toys.