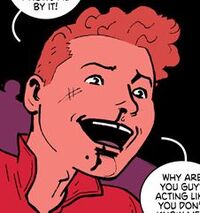 Com'on it's me, Paulie! Everyone knows me by my red shirt.

Paulie approached Marcus and his crew after all the rats had been declared the target of the schools final hunt. He offered to team up with them as they escaped from Shabnam and his crew.[1]

However, when Victor tracked him and Billy down, Paulie bailed and left Billy to fend for himself.[2]

Retrieved from "https://imagecomics.fandom.com/wiki/Paulie_(Deadly_Class)?oldid=56233"
Community content is available under CC-BY-SA unless otherwise noted.