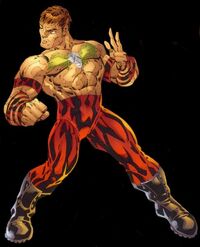 Grunge is the codename of Percival Edmund Chang, a comic book character from Wildstorm, and is a member of the superhero team Gen¹³.

Philip Chang sent his son into hiding while he was still an infant. Born in Hong Kong but raised in Seattle, Percival Edmund soon became known as "Grunge", an all-American slacker who knew little about his brave father. He was eventually invited to take part in I.O.'s Project Genesis, where Grunge soon found out he was in a prison-like breeding ground for Gen-Actives. Manifesting his powers, he escaped with his new teammates, a group soon to be called Gen¹³. Grunge is a skater/surfer and enjoys spending his afternoons sleeping in. Although he lives in a beach house with three beautiful superwomen, only Freefall appreciates him for who he really is. However this never stops Grunge from trying to hit on the others constantly.

While on the surface seeming to be nothing more that a typical frat boy type, there is more to Grunge than he lets on. He also has a photographic memory but tends to keep this fact to himself for fear of being thought a nerd. Grunge is also an avid fan of comic books and Hong Kong Kung Fu movies and action films. He especially likes the films of Bruce Lee, Jackie Chan, and John Woo.