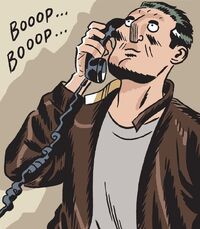 Pete is an experienced assassin who rarely shows any special treatment to anyone.

One day, he was ordered to kill Angie Vaccarrio's parent. He succeeded but Angie escaped.[1]

One day, Pete sat in his home in Red Circle when a dog appeared at his window. He let the dog in when he saw blood all over the dog's body and face. As he cleaned up the dog, he noticed scratches but no major cuts, and he believed he may have been used for dog fighting. He had the dog jump in the back of his Chevy truck as they headed into town to investigate.[2]

He headed to South Bank, where the minorities and drug trades occur in town. He found Joon and asked for him to look to see if he recognized the dog. When Joon called him Killer, the dog snapped and tried to attack him. Joon freaked out and told him to scope out Chicano-Town.[2]

As Pete took him to Chicano-Town, aka Moroscoville, Killer jumped out the back of his truck and ran towards a home. Pete found Frankie and Julie Scalina murdered in their home, rival mafia members. He called Carter and had them pick up jewelry and money from the house. They decide to leave the dog as it was the Scalina's. As they left, the Cowboy noticed bit marks in Frankie Scalina's neck.[2]

As they left, a dark-haired assassin woman arrived. She hugged Killer and told him she's glad her boy is alright.[2]

Later, an old cohort of Pete's who now works for Massina, Mia Dorme, met with Pete at his home. She explained she had a job and it went south when another assassin showed up and created a bunch of noise. They discussed if it was a setup as it was too much of a coincidence. They suddenly had shots fired at them and they attempted to flee.[3] They lost their pursuer, Angie Vacarrio, but took note of their license plate.[4] They tracked it down to discover it was Nicole. They attempted to follow up on another lead but he was blown up in a bombing. They decided to head straight for Massina and Scalina for answers.[5]

Pete soon returns to the cabin with the crime bosses Massina and Scalina. They blow up the cabin and kill the daughters inside, except for Angie Vaccarrio who was returning home later after chasing Pete.[1]

Retrieved from "https://imagecomics.fandom.com/wiki/Pete_(Dark_Corridor)?oldid=54237"
Community content is available under CC-BY-SA unless otherwise noted.