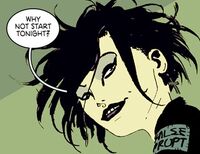 Petra first met Marcus as a party.[2] When he was rejected by his friends, she invited him out to hang with her.[3] Eventually, the two hooked up as Marcus continued his downward spiral of shame and worried about his friend turning against him.[1]

Master Lin soon announced the final was to kill all the rats, those that have disobeyed the school's rules. Marcus grabbed Petra as the two attempted to flee from their classmates. Petra concocted poison to help them kill several classmates that were pursuing them. They then grabbed Billy along the way who agreed it was safer to be with his kind, the rats, then to be with others. Elsewhere, Victor teamed up with Shabnam as they made plans to hunt down and kill Marcus.[4]

They made a plan to kill Victor. When Paulie bailed on them, Billy was chased and was left to improvise. Marcus and Petra caught up with Billy as the trap and found Billy had been beaten savagely. Victor was sprawled out on the ground as the gigantic stone they rigged had fallen and smashed Victor in the back. However, they were soon attacked by an explosive arrow. They escaped to the last place anyone would look for the three of them, f-face's old place, the Tenderloin. Marcus finally agreed with Billy and Petra to run from the school and stop playing this deadly game.[5]

"And speaking of outdated costumes--How long did it take you to get done up like a gothic ghouly tonight, Petra love? Oh sad, poor poet. Thigh-cutting, clove-smoking, Mardy Fuckin' Bauhaus listener. Get some health in your diet. Spend a day in the park. Feed the sodding squirrels--Life's not so bad. " Petra responded by flicking him off and saying: