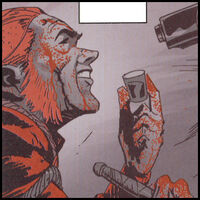 Phillip Hollingsworth was a serial killer in the Republic of Texas. He was arrested while covered in the blood of his victims and bragged about it to the Texas Ranger that brought him in. However, a corrupt judge, that was financed by his wealthy family, found him not guilty and ordered his release.

However, he was executed in the court room by the only surviving member of the family that he murdered, a Texas Ranger named Hurk.

Retrieved from "https://imagecomics.fandom.com/wiki/Phillip_Hollingsworth_(East_of_West)?oldid=61117"
Community content is available under CC-BY-SA unless otherwise noted.