Start a Wiki
The Curse 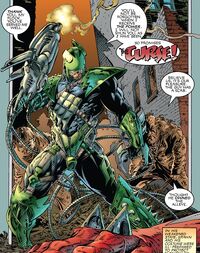 How does it feel, Hellspawn? To be helpless with no limbs. Waiting for the next wave of pain to pour over you.

Phillip Krahn was born to a religious zealot and placed his entire life in his faith. He prepared his entire life for entry into Heaven. He began to believe sacrifice was the only way to gain God's attention. At a young age he removed his own eye and then scarred his other eye as a sacrifice. When he did not hear back for his prayers, he cut off his right arm to prove he was worth of God.[1]

Doctors felt he was craving attention and any help given to him did not change Phillips devotion to God. After attending college and gaining a large sum of wealth from being a successful business owner, Phillip turned his eyes back to God once more.

He studied the occult so as to learn of ways to gain access into Heaven. He learned about the recent appearance of Spawn. Phillip believed Spawn was a heavenly warrior. He decided to kill Spawn to demonstrate that he was more than worthy.

Dawning the mantle of The Curse he used street bums he converted to find Spawn. Upon spotting him in an alley, he shot Spawn from behind with a massive blast tearing a hole through Spawn's chest. Spawn was too weak from having recently reviving his friend Bobby to fight back.[2] The Curse left Spawn in the alleyways and preached to the bums of God's superiority.

However, Spawn did not die. He retaliated while the Curse was distracted and blew off The Curse's bionic arm. The ensuing fight was fairly quick but an enraged Spawn savagely beat The Curse unconscious.[1]

Spawn then hung The Curse in the alleys as a warning sigh that the alleys belonged to him. After several days of torture, The Curse was freed by John Sansker only to be tortured further by Sansker. John wanted to know the horrible things Spawn did. The Curse lied and said that Spawn performed heinous acts to stop the torture John was inflicting. The Curse then escaped to his Castle Home in West Virginia.[3]

After much time had passed, Spawn was returning home to his throne. He was suddenly electrocuted when he sat in his throne. A trap had been set by Curse's Minions. As the Spawn lay unconscious, they then ran a forklift through his chest and had Spawn transported to Curse's Castle. Upon waking up, The Curse revealed his plan to dissect Spawn to discover the source of "Evil" in him.[4]

The Curse left Spawn to finish up his planning. While he was out. Spawn self-amputated his hand to let it run free. He used his hand to free his costume. Moment later upon re-entering the room, The Curse found himself suddenly battling a freed and enraged K7-Leetha suit. After being defeated and cut in half, The Curse ignited a self-destruct bomb destroying the castle. However, Spawn and his costume successfully ejected themselves seconds before the blast.[5]

Curse of the Spawn

Unrelenting in his passion for understanding evil, The Curse appeared with his Minions once more in New York City with a new plan. They intended to find the secret Order of the Knights Templar member hiding in Tony Twist's organization. He offered Tony information on a mole in his organization, one of his Vatican Secret Police pursuers that was disrupting Tony's business at the time. When the source checked out to be accurate, Tony gave the Curse Vincent D'Egallo's name as the potential Knights Templar member.

The Curse kidnapped Vincent and was preparing to disect him. He announced his desire to understand where his holy armor existed. The operation was cut short by the Vatican Secret Police breaking in and killing Vincent.[6] The Curse laid low for several years with his operations once again being destroyed.

Retrieved from "https://imagecomics.fandom.com/wiki/Phillip_Krahn?oldid=65986"
Community content is available under CC-BY-SA unless otherwise noted.