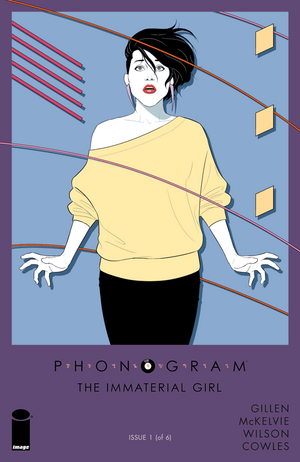 In 1980, a small girl named Claire watched music television due to her parents having money to afford satellite TV. She was offered a deal to become one with that world of TV and took it, agreeing to become 2D.

In 2001, David spots his friend Claire. She corrects him that her name is now Emily Astor as she's performed an identity change. They enter a private party at a club. Inside, The Myth presents his idea of starting a new coven where they are free to worship whatever music they like. He tells the DJ to turn the music up as he heads off stage.

David and Emily spot Lady Vox on stage. Seth Bingo interrupts them and tells them everyone is a part in the audience. He quizzes a random man on the Suga Babes. When he doesn't know the answer, Seth uppercuts the man. David helps the man up who introduced himself as Indie Dave.

In 2009, Vox pitches an idea of bringing back retro music to Emily, who remains unimpressed. Shambles walks in at Emily's request. She rebukes him at not referring in the potential magic of music. She ordered him to retrieve her since tea.

Inside the TV awaits the Claire who made the deal as she watches Emily interact in the normal world.

That night, Emily called David. After hanging up the phone, the TV Emily reached out to grab her and exchange places.

The team behind the New York Times bestselling and Eisner-nominated smash hit THE WICKED + THE DIVINE return to the acclaimed urbanfantasy where they first made their names. Nearly a decade ago, Emily Aster sold half her personality for the power to rule a coven of phonomancers. I’m sure nothing could go horribly, monstrously wrong now. In a world where Music is Magic, a song can save or ruin your life. In THE IMMATERIAL GIRL, we discover what a video can do.

Retrieved from "https://imagecomics.fandom.com/wiki/Phonogram:_The_Immaterial_Girl_Vol_1_1?oldid=41569"
Community content is available under CC-BY-SA unless otherwise noted.