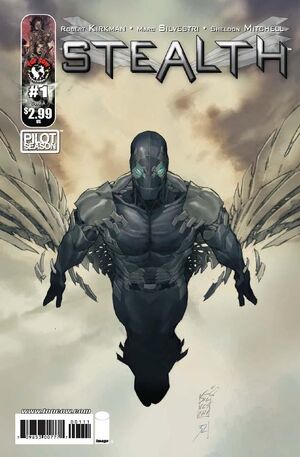 From the creative minds of Image partners Robert Kirkman & Marc Silvestri! Todd Carey is recovering from a nasty divorce, his daughter is flunking out of college and he's just learned that his father has been diagnosed with Alzheimer's. Unable to really take care of himself, Todd has allowed his father to move in with him. What Todd doesn't know, is that his father is the masked vigilante STEALTH... and has been his entire life. Stealth has many enemies and his erratic behavior could easily get him killed--and all this trouble falls squarely in Todd's lap.

Retrieved from "https://imagecomics.fandom.com/wiki/Pilot_Season:_Stealth_Vol_1_1?oldid=49724"
Community content is available under CC-BY-SA unless otherwise noted.