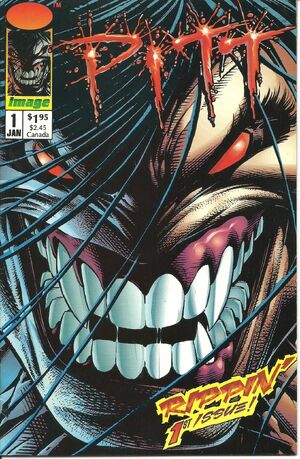 Pitt, newly arrived on Earth, is assaulted by a biker gang. Pitt tears them apart, an event which is subconsciously witnessed by 7-year-old Timmy, who wakes in a fright. Pitt is scolded by a shared consciousness named Jereb for his unnecessary violence as Pitt steals one of the gang members clothes and motorcycle.

Detective Jack Smithers of the NYPD finds himself saddled with a new partner, Detective Bobbie Harras, as his case with the superhuman subway attack is bumped up to a homicide. The detectives arrive at the crime scene just as three more aliens materialize in the subway car and begin to slaughter the bystanders.

Retrieved from "https://imagecomics.fandom.com/wiki/Pitt_Vol_1_1?oldid=21246"
Community content is available under CC-BY-SA unless otherwise noted.