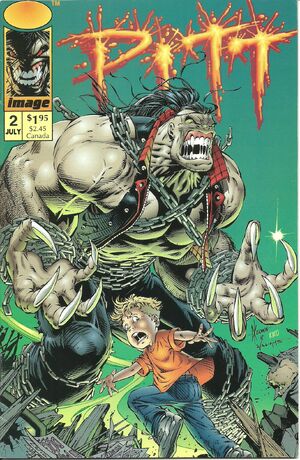 Appearing in "Dead Or Alive"

Plot Synopsis for "Dead Or Alive"

A woman is having her statement taken about a bank robbery. She tells how she was taken hostage and saved by a strange creature that tore open the van and survived point-blank gunfire. The officer taking the statement gets an emergency call for backup at Times Square.

The aliens from the subway have blasted up through the ground, leaving Det. Smithers buried under rubble. Det. Harras lifts the rubble off of her partner, despite it weighing several tons.

Jereb informs Pitt that he shares a genetic profile with the Earth child Timmy. As such, the alien bounty hunters will be tracking him, thinking the boy is their target. Pitt arrives at Timmy's house just as the bounty hunters do, and Pitt kills them. Timmy asks Pitt what the aliens were after, and Jereb simply calls it a misunderstanding before teleporting Pitt away.

Meanwhile, on the Creed mothership, a soldier reports to his master Zoyvod that Jereb escaped the attack on his homeworld and has fled to Earth inside the consciousness of Pitt. Zoyvod is not pleased.

Write the first paragraph of your page here.

Write the first section of your page here.

Write the second section of your page here.

Retrieved from "https://imagecomics.fandom.com/wiki/Pitt_Vol_1_2?oldid=64739"
Community content is available under CC-BY-SA unless otherwise noted.