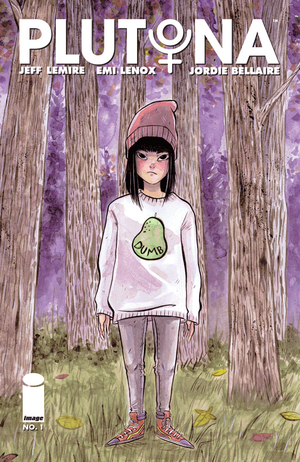 What the fuck is capespotting?

In a forest outside of Metro City, Plutona lays passed out on the ground.

Elsewhere, Teddy listens to the radio as it broadcasts the local news about what superheroes are doing and where they've been spotted. He updates his log of where all they have been seen. His father comes home and orders him to start getting ready for school.

Elsewhere, Diane gets ready for school in her room as puts on her new jacket she spent a lot of time creating. She hugs her dog Loki goodbye as she heads out to school.

Elsewhere, Ray attempts to wake up his dad. He tells him he's going to be late for school as he lifts a box of cigarettes from the table.

Elsewhere, Mie is told by her mother she needs to come home after school. Mie protests she was going to Diane's house to play with her new puppy, Loki. Her mom instructs her she must watch over her younger brother until she returns home from work. As she heads out to school, he brother trails behind with his face buried in his mobile game system. Diane catches up with them and Mie is really impressed with her new jacket. She makes a deal to wear it until lunch time and then she promises she will return the jacket to Diane. Diane reluctantly agrees. As they walk to school, Ray teases and bullies everyone as they walk by.

Later, school ends and Diane is upset that she never got her coat back. She lets Mie run the show but her passive aggressive ways eventually get Mie to return the jacket. When Mike, Mie's younger brother, finally gets out of class they leave to head home. Mike continues to bury his head in his game system.

Teddy heads to a hill where he can see the Metro City skyline. Ray spots him and being teasing him again. When Teddy informs him he's Capespotting, Ray becomes interested.

When Mie, Diane, and Mike walk by, Ray jumps up and pretends capespotting is stupid and he wasn't interested. As the group bickers, Mie suddenly realizes Mike is no where to be seen. They run down to the forest below in an attempt to find him. They find him standing over Plutona's body as she lay passed out on the ground.

In Metro City, Plutona works at a local diner in regular civilian glothes and no one is aware of her secret identity. After her shift, she returns home to her daughter and mother. Plutona apologizes for working late but they had a worker call in sick. Her mother tells her she's never home and should consider spending more time with the family as they need her. Plutona responds that the city needs her as well. She receives a sudden call from the governor. She tells her mom she needs to take this and asks her to stay with her daughter longer as she transforms into the superhero Plutona.

Retrieved from "https://imagecomics.fandom.com/wiki/Plutona_Vol_1_1?oldid=45572"
Community content is available under CC-BY-SA unless otherwise noted.