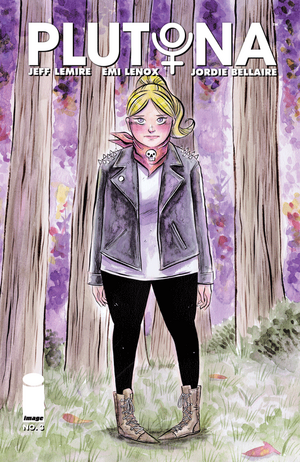 At school, Diane waits for class to end. As soon as the bell rings, she heads to the exit and waits for Mie. However, she never shows as she had promised. As she walks home, she suddenly spots Mie and Ray by the fence where they originally found Plutona's body. Diane wanted to know where Mie was and Mie told her to not make a big deal of it. She smoked a cigarette and Diane disapproved that it felt like her friend was changing. When Ray called her "chubs," and Mie didn't stick up for her, she finally made a comment about how Mie wasn't sticking up for her. They decide to check out where Plutona's body was stashed.

When they arrive, Plutona's body is missing. Teddy arrives with his shovel and tells them he was let out of class early. He said he looked for Plutona's body but couldn't find it anywhere. When Ray calls Diane chubs again, Mie finally sticks up for her friend and tells him to stop picking on her. They check social media to see if anyone else had found it and reported on it. They find nothing and wonder where it could have gone. They head home, sad that they couldn't find closure.

Later that night, Teddy returns to find Mike watching over Plutona. He asks if he's ready. They pull out a knife and extract blood from Plutona to see if giving it to themselves will grant them powers.

After the bomb explosion, Plutona looks up and finds the White Wasp standing over her. He tells her he's improved the technology for his stun gun and suit. Plutona begins to lose her control and attack him. From a nearby window, Plutona's daughter watches her fight the White Wasp and worries that if Plutona kills him, she'll be no better than the bad guys.

After discovering the body of PLUTONA, the world's greatest super hero, in the woods, five kids must decide what to do next, a decision that may tear their young lives apart.

Retrieved from "https://imagecomics.fandom.com/wiki/Plutona_Vol_1_3?oldid=51147"
Community content is available under CC-BY-SA unless otherwise noted.