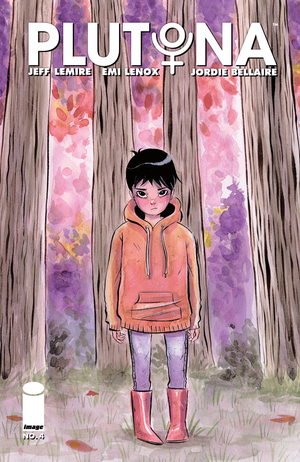 Yeah, well maybe you shouldn't have got caught jerking off in the school bathroom in seventh grade, Tugger.

Mie and Mike get ready for school. Mie receives a text from Diane asking her to walk to school with her, and she pretends to have not seen it as she stuffs it back into her pocket.

Elsewhere, Teddy has his fingers in band-aids as he stares at a poster on his wall with Plutona on it. His father asks if he's been feeling well, as he's stayed home several days from school, and he grumpily insists he's fine as he stands in the dark of his room.

At school, Diane approaches Mie as she's hanging out with Ray. She asks why she's avoiding her but Mie denies the allegations. Teddy arrives as well and Ray begins to tease him. Teddy stands up for himself and Ray doesn't back down. They're interrupted by the school bell ringing as they head off their separate ways.

After school, Diane tries to talk to Mie, but Mie continues to avoid her. Meanwhile, Mie sees her brother talking to Teddy and she becomes protective. She sees Mike has bandages on his fingers the same way Teddy does. She pulls him away and tells him to stop talking with him.

Later that night, Ray is bossed by his abusive father to take out the trash. Outside, he spots Teddy walking towards the woods. He texts Mie to meet him to follow and investigate what has Teddy acting all strange. When Mie meets with Ray, they head to the woods. They find Teddy with a knife over Plutona and they freak out what he's doing and why he'd have lied that he didn't know where the body was located. After Ray and Teddy push each other around, Teddy falls onto the knife and stabs himself in the stomach.

Mie begins to suspect that one of her friends may have broken their pact to keep Plutona's body a secret, but nothing can prepare her for what she finds next. The penultimate chapter in the breakout hit by JEFF LEMIRE and EMI LENOX.

Retrieved from "https://imagecomics.fandom.com/wiki/Plutona_Vol_1_4?oldid=55940"
Community content is available under CC-BY-SA unless otherwise noted.