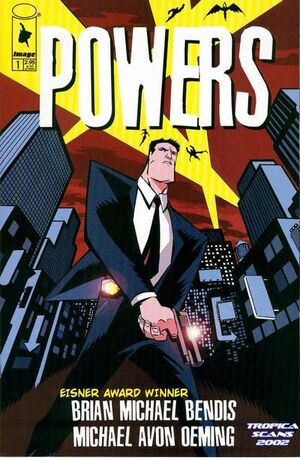 Today's a shit day, Flinch. I swear to you - I swear to you I know that kind of day. But you gotta look at it another way. A day like this - a day like this is when you find out what you're made of. Right? Any asshole can keep their shit together on the good days. But the shit day? That's when you show your character. Today's the day you show everyone what you're really made of. And I damn well know you're made of better than this, right Flinch? You're gonna let a girl drive you nuts like this? Roll it off and be a man. All you done in your life - all the stuff that made you... you -- and you wanna be remembered as some schmuck held a little girl?

Heroes glide through the sky on lightning bolts and fire. Flamboyant villains attempt daring daylight robberies. God-like alien creatures clash in epic battle over the nighttime sky. And on the dirty city streets below, Homicide Detective Christian Walker does his job. Detective Christian Walker is a special homicide officer in charge of cases that involve...Powers. What is a cop's job like in a world where Powers are par for the course? And what kind of cop is given the assignment? Find out in the gritty, new crime comic book series Powers from super hot comic writer and EISNER award winner Brian Michael Bendis (Sam And Twitch, Daredevil, Jinx, Batman) and art deco comic artist Mike Avon Oeming (Young Justice, Superman). This on going, hard-boiled crime comic with a mainstream twist is brought to you in startling full color by Pat Garrahy (JLA).

Retrieved from "https://imagecomics.fandom.com/wiki/Powers_Vol_1_1?oldid=57356"
Community content is available under CC-BY-SA unless otherwise noted.