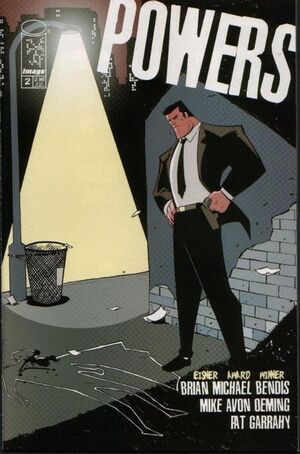 Thing of it is -- I mean - I want to do my job. I want to look my friend Walker here in the face and be able to answer every question that could possibly pop into his thick cop-like head... the thing is I-I-I can't when it comes to stuff like this. There's no textbook. There's no manual. I have to retrain myself every day. I might as well throw my M.D. in the garbage! It's worthless. Throw it out!! Bye bye!! Do you have any idea what it's like every goddamn day? Fucking space lizards and orangutans with laser guns. What the fuck?

Detectives Christian Walker and Deena Pilgrim work out of the special homicide officers in charge of cases that involve...Powers. And now they are involved in the most important case of their careers. Retro girl, America's darling, has been murdered. It's cops and superheroes like you have NEVER seen them in the gritty, crime comic book series Powers from super hot comic writer and EISNER award winner Brian Michael Bendis (Sam And Twitch, Daredevil, Jinx, Batman) and art deco comic artist Mike Avon Oeming (Young Justice, Superman). This on going, hard-boiled crime comic with a mainstream twist is brought to you in startling full color by Pat Garrehy (JLA).

Retrieved from "https://imagecomics.fandom.com/wiki/Powers_Vol_1_2?oldid=57357"
Community content is available under CC-BY-SA unless otherwise noted.