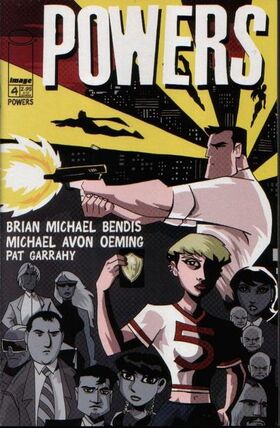 How deed it feel when I was inside your head? Do you remember how that felt? I do.

THE MOST EXPLOSIVE ISSUE YET! Hey! This is Brian Bendis, sure you know me from my work in SAM & TWITCH and Daredevil-and you're dizzy with anticipation over the debut of HELLSPAWN, but POWERS? Well, Powers is like the comic book version of the TV shows Homicide or NYPD Blue-well, with superheroes flying around. Just regular cops trying to do their job- cinematic action scenes, gritty realistic dialogue, and characters you truly care about. This is a damn fine issue to join us on and I'll tell you why. We have superstar comic creators like David Mack and Ashley Wood filling the backdrop of our comic with their own brand new comic book creations. This issue is jam packed with them. We have at least fifty cameos this time. You'll be surprised to see who else we've lined up. Some of the biggest names in comics! If you can't tell, this book is a total labor of love for myself and artist, Mike Avon Oeming. Mike has created this amazing art style for Powers. It's part Bruce Timm, part Alex Toth, and completely captivating. He's given the entire series this sweeping epic feel. Now I know you've been hearing nothing but good stuff about this series, so isn't it about time you treated yourself to a new kind of comic book fun? Give Powers a try, you won't be dissappointed.