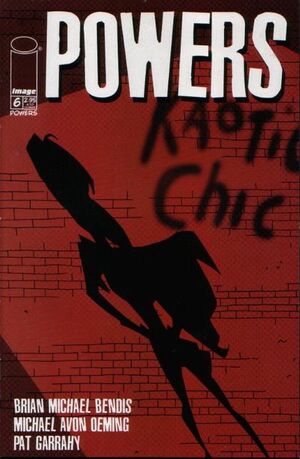 Retro Girl's murderer has been caught. But the murderer's interrogation and confession will shed surprising light all over the mysteries that surround the detectives and the world of POWERS. All this and a surprise ending that will knock the socks right off your feet. This is the latest issue of Powers. Cops and capes. Homicide with superheroes. Co-created by Brian Michael Bendis (SAM AND TWITCH, HELLSPAWN, Ultimate Spiderman) and Mike Avon Oeming (Young Justice.) This on-going, hard-boiled crime comic with a mainstream twist is brought to you in startling full color by Pat Garrahy (JLA).

Retrieved from "https://imagecomics.fandom.com/wiki/Powers_Vol_1_6?oldid=57363"
Community content is available under CC-BY-SA unless otherwise noted.