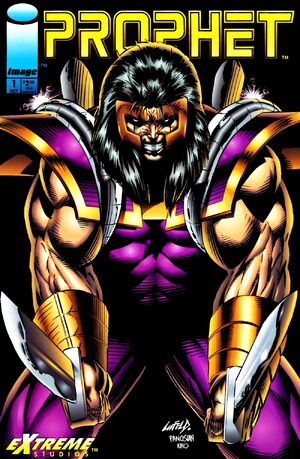 Atop a seaside cliff, Prophet fights his way through a squad of armed robots and climbs a ladder into their aircraft.  Inside, he finds their hooded leader side by side with, to his horror, his long-lost love Mary.  The leader pulls back his hood, revealing he looks exactly like Prophet, just as Kirby wakes Prophet up; it was all a nightmare.  He and Kirby are aboard an airplane bound for an installation in Alaska where they hope to reestablish his link with the Direct Orbiting Command Center (DOCC) satellite that fuels his powers.  Prophet recalls volunteering decades ago to be a test subject for Dr. Horatio Wells in exchange for getting his family safely to the U.S. following his father’s murder by the Nazis.  Wells’s experiments transformed Prophet into a superhuman intended to one day fight the evil Disciples.  In the process, he first met Kirby who was Wells’s lab assistant.  At the Pentagon, an official holds a briefing on Prophet and introduces the FBI liaison leading the effort to capture him, Mary McCormick. In Anchorage, Prophet and Kirby parachute onto a G.A.T.E. research installation and are immediately met by an armed security force.

Retrieved from "https://imagecomics.fandom.com/wiki/Prophet_Vol_1_1?oldid=73750"
Community content is available under CC-BY-SA unless otherwise noted.