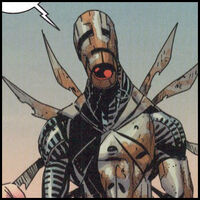 The man who eventually became known as Psalm 137 was among the 150 religious zealots who volunteered to become enlightened in the service of what they believed in. However, what happened instead was that all of them were subjected to medical and psychological torture that turned them all into the perfect cybernetic soldiers. Also all of them had their memories wiped out in order to facilitate their programming to take over more readily.

By the time that Psalm 137 was selected to be one of four bounty hunters sent out by Tracker to find and kill Babylon, the son of Death, he was the last surviving unit of the original one hundred and fifty. The other three sent out with him were Billy Blackgun, One Eye Wyatt and Ursula Lock.

When the three remaining bounty hunters located Babylon, they each defeated in a different manner. Psalm was reprogrammed by Balloon and was deactivated by the robot.

Retrieved from "https://imagecomics.fandom.com/wiki/Psalm_137_(East_of_West)?oldid=61742"
Community content is available under CC-BY-SA unless otherwise noted.