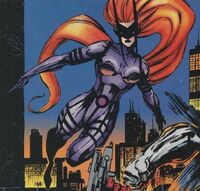 Razor is the name of a supervillainess who worked as part of The Mercs. She was a former member of StormWatch prior to joining The MERCs. She worked alongside team members Hellslayer, Brutus, Kilgore, and their leader Deathtrap.

Razor's history is briefly described as being an ex-member of StormWatch. However, her greed took over and she chose to join The MERCs for wealth. Since then, she was the lover of Deathtrap. She made only one significant appearance, during the private investigative mission of Flashpoint,[1] who was in pursuit of answers to the abduction of his team by the MERCs during Desert Storm.[2] Razor acted as Deathtrap's conscious when she reported the news she heard about teammate Kilgore's death at the hands of Flashpoint. However, Deathtrap was indifferent. She struggled to understand why he was this way. Despite this, Razor remained Deathrap's companion, obviously valuing the wealth he shared with her above anything else. She was confronted by Flashpoint during their alleyway fight, about her departure from StormWatch. After this fight, it is not clearly known what her fate was or that of her teammates who were attacked by Nautika and Sunburst who were sent to apprehend Flashpoint to keep him from his deadly manhunt of MERC members.

Retrieved from "https://imagecomics.fandom.com/wiki/Razor?oldid=63930"
Community content is available under CC-BY-SA unless otherwise noted.