Edit this page
The Reaper 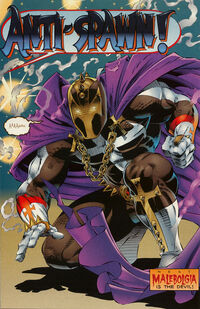 See? See how the holy burning light of Heaven dispels the darkness? Now you, Hellspawn. I'll make you scream.

Redeemers are Heaven's answer to the Hellspawn, a righteous infused with heavenly matter to smite the forces of Hell and protect the members of Heaven's Flock. From time to time, the Ethereal Masters seek the assistance of the Star Hive to create durable, loyal soldiers for the forces of God. This mysterious organization chooses mortals it feels are worthy and transforms them into Angelic warriors with Elemental Fire on par with Hell's minions.[1] The Redeemers retain no knowledge of their previous mortal existence as the Redeemer, and retain no knowledge of having been the Redeemer upon returning the mortal realm. However, certain cases like with Eddie Frank retain the memories of their past life after their transformation. Much like their demonic counterparts, the Redeemers carry the same limitless rage inside their souls, however the core of their anger is that of light rather than darkness. There had been three people who were the host of the Redeemer the first was Jason Wynn, the Second was Phil Timper,and the third and current Redeemer is Eddie Frank.

Gabrielle saw the threat of the new Hellspawn, and was instructed to create the first of Heaven's soldiers to challenge Spawn. The station choose the first Redeemer to be Jason Wynn. Jason was also the man who had killed Spawn in his mortal form, Albert Simmons. Through nuclear diffusion, his body and soul were melded with Elemental Fire. It caused Wynn a great amount of pain and suffering, which would only be alleviated by Spawn's defeat. Frenzied with pain, the Anti-Spawn mercilessly attacked Spawn, who was caught off guard and unable to defend himself.[2] As the Anti-Spawn was about to deliver the killing blow, a distraction provided by the bums in the alley gave Spawn an opening to defeat the Anti-Spawn. The Redeemer was recalled to the space station, where he was to be infused with even more Elemental Fire. Due to his lack of purity, he was prevented from harnessing its true power. Wynn was returned to earth with his mind wiped of the events.[3]

Phil Timper was a man who was in and out of prison and did not have his life together. It was only 11 years ago he found the lord and changed his ways to be a perfect citizen. He is suddenly teleported to Orbital Angel Station and imbued with Elemental Fire to become the next Redeemer. Upon order, he tracked and retrieved Bobby for heaven. He was the first example to ever have been resurrected by Necroplasm magic given to him by a Hellspawn.[4]

When Spawn infiltrated Terran Affairs Headquarters to retrieve his friend, he found Phil Timper as the Redeemer even more powerful than Jason Wynn. After having his arm sliced off, Phil's body began spewing pure Elemental Fire. The building floor was exploded with a Necroplasm bomb as Spawn escaped with his friend.[5]

Eddie Frank was released from Juvenile Detention and now hated Spawn for the position he was put in. He killed himself and was reborn as the Redeemer.[6]

His body was revived at the hospital which left doctors baffled with his one beat per minute heart rate. Meanwhile, his soul battled Spawn as the newest redeemer. When Mammon entered the hospital with the Box of Eden, the Redeemer retreated from battle leaving Spawn battered and broken in the desert where he was taken away by Demons to hell per Mammon's plan.[7]

Realizing the error of his ways, the Redeemer recognized his father was abusive and Spawn actually saved him. He retrieved the Box of Eden for Spawn and delivered it to him. They were all betrayed by Cogliostro when he stole the power of Hell and vanquished Al with his new power. The Redeemer was left in hell.[8]

Nyx struck a deal with the demon lord, N'Zzezheaal, to enter Hell and return with one soul. Nyx entered hell to find her friend Thea, who had been taken by Mammon.[9] When the Redeemer sensed the hellspawn suit, he immediately moved to attack. However, after being over powered he learned Nyx was searching for a friend and agreed to help if she helped him escape hell. She agreed, but lied as she knew she could only save one which she had planned on Thea.[10]

They later found Thea's soul but were asked to leave her be. Thea knew her body was dust and bones and she could not return to earth. Instead, she asked to be freed and the Redeemer gave Nyx his sword so that she could destroy her soul and release her from eternal torment. In return, Nyx returned to earth and brought the Redeemer with her.[11]

Upon returning to earth, the Redeemer found himself at war with Spawn. The two battled as the Redeemer believes he was protecting Nyx from harm. When Spawn defeated him, he used the Redeemer's own sword to cut off his wings. He was instantly transformed back into the boy, Eddie Frank, that Spawn had met twice before.[12]

Eddie later returns as The Redeemer and appeared on Earth in an attempt to assassinate Jim Downing's girlfriend Sara while thinking she was a servant of Hell but relented after realizing she was a Christian and granted her one of his crucifixes to protect her against the hellish influences. The Redeemer then appeared to interrogate Jim to find the whereabouts of the Redeemer's wife Victoria, an angel that had earlier tried to kill Jim but had been defeated and removed of her wings by the Violator that left his wife an insane amnesiac wondering as a homeless womam. He attacked the Violator and engaged him in battle but was defeated when Violator called his horde of Vampire allies who damaged and mutilated the Redeemer.[13]

The Redeemer was later revealed to now be working for Violator after being bitten and turned into a Vampire-Angel Hybrid alongside his fallen angel wife Victoria. He was then sent to slaughter Bludd's vampires under orders by Violator for betraying their alliance. Then later on After Al Simmons returns The Redeemer and the Rapture plan on attacking Simmons and Al reveals that Eddie Frank's body is still in Redeemer's possession.