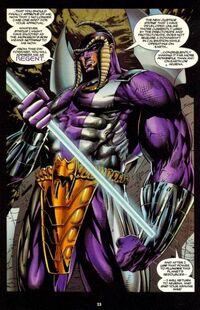 Rijian was a member of a faction, called the Directorate, on his homeworld of Aegena. The world was mired in a long civil war, as the Directorate fought against another faction, the Protectorate, for control of the planet. The members of both factions had special "stones" (in reality, a symbiotic organism) embedded in their chests. The stones imbued them with a variety of powers, including super strength, flight, energy manipulation and a staff composed of pure energy.

Rijian was the eldest son of the Directorate King Darian. As a child, Rijian was regarded and loathed by his father and his peers for his seeming weakness. During his formative years, he became the brother to Darian's second son Prince Darnel, who was intended to eventually replace Rijian as heir to the Directorate throne. Darian's plan was to leave Rijian on Earth, after their visit through a dimensional portal, to introduce him to their base of operations on that world as part of his son's new assignment. That "assignment" was to have Rijian become the Earth-based commander of Directorate forces. Rijian, who had grown to hate his father, grudgingly accepted this mission. During his teenage years, Rijian had commenced work on a new Justice Stone that would not need any alterations during travel between Aegena and Earth. It was also during that time, Rijian suffered the tragic loss of his mother and brother during a Protectorate ambush launched in retaliation for a Directorate attack on a school of Protectorate students. These events took a significant toll on the course of Rijian's life, as he emerged some extended time later a transformed individual, immensely-powerful from the new Justice Stone he created and as cold and unforgiving as his warrior-king father. Proclaiming himself as Regent,[1] he would continue to forward the conquest of Earth, promising also to end the war on Aegena when his task was done.

Regent would go on to make new enemies on Earth during his appearance in the Ukraine. During the Chernobyl crisis, Regent made an epic entrance when he emerged through the nuclear reactor itself, unharmed.[2] He went on to engage StormWatch Two, led by Cannon, sent to intervene. Regent dismantled the team, killing two of its members and capturing two others including Winter and Fahrenheit. He was engaged by StormWatch One led by Battalion, during their rescue attempt of the first team. StormWatch One and survivors of StormWatch Two battled Regent to a draw and he fled the facility at Chernobyl, leaving StormWatch to deal with the impending meltdown.[3] He would return to notice when he met the human Jill Monroe.[4] Regent effectively seduced Jill and engaged in a brief relationship until she discovered he was an alien like Union. Regent went on to fight and kill Protectorate member Maikone,[5] who according to Union, was supposed to have long since left Earth after he and Protectorate soldier Eliyah visited Union to warn him of the Directorate activity on Earth.[6] Ultimately Regent and Union would meet in mortal combat across a two-part comic special that would see the end of Regent.

Retrieved from "https://imagecomics.fandom.com/wiki/Regent?oldid=65258"
Community content is available under CC-BY-SA unless otherwise noted.