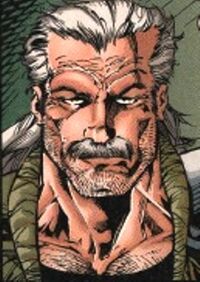 Regiment was a member of Team One: Stormwatch. Regiment had known operations head Miles Craven before being recruited as part of the experimental Team One program.

Undoubtedly, Regiment is a military veteran having served time in the "brig"[1], it can be assumed he was a former US Naval serviceman. As with most of Image's powerhouse characters, Regiment was the biggest member of Team One and unquestionably the strongest. His already-given physical strength was enhanced through experimental injections administered by scientists under Craven's orders. It was likely, the injections were some sort of advanced steroids. This could sufficiently explain Regiment's overly-aggressive nature and disintegrating lack of self-control and respect for authority.

Regiment's last action was in the final mission for the team.[2] Battling Daemonite aliens led by Helspont and rogue human mercenaries under the crime lord "Slaughterhouse Smith" at a military installation, Regiment went off to stop the launching of a missile programmed for New York. By the end of the mission, Regiment was killed in the resulting ride he took aboard the launched missile.

Retrieved from "https://imagecomics.fandom.com/wiki/Regiment?oldid=49557"
Community content is available under CC-BY-SA unless otherwise noted.