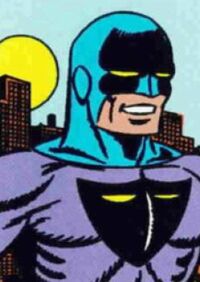 When he was in college, Reid Randall had received a letter from his mother and learned that his brother Ted had gotten into gambling debts with criminals led by a man named "Gentleman" Mac Duggin who wanted to take over their family's garment business. Both Ted and his wife Janet were killed when their car exploded, inspiring Reid to become the Knight Watchman and defeat Mac Duggin and bring him to justice.

Forming The Knights of Justice

Knight Watchman had received a distress signal from Dr. Igor Eisner that Nazis had broken into his lab. He searched the scientist's lab and used one of his inventions; a jetpack, to fly into the sky and rescue him from his kidnappers in the Great Lakes. Then, Knight Watchman accompanied Eisner to the Great Minds Summit at the Smithsonian. He met his fellow heroes, Ultiman, Venus, the Badge, the Beacon, and the Blitz, who had also each accompanied an attendee to the Smithsonian, in addition to meeting President Franklin D. Roosevelt and British Prime Minister Winston Churchill. Together, the heroes had defeated the Nazi collaborator Dr. Henry Hyde, who had accidentally killed himself. Afterwards, the heroes formed the Knights of Justice; a name suggested by Ultiman,