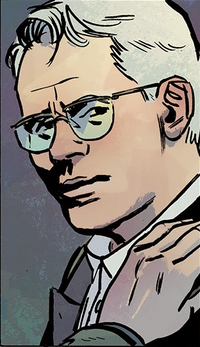 Fifteen years later, Kyle returned to Rome. The Reverend spotted him and found no coincidence in running into him when he was once again called upon to exorcise a small boy. After convincing Kyle to help, they found Joshua's demond was even more powerful than Kyle's mother's. The Reverend was amazed to find that Kyle was able to once again exorcise someone.[1]

The Reverend brought Kyle with him to visit Mildred. A woman he exorcized earlier. However, she reacted poorly when Kyle touched her and the Reverend quickly pulled Kyle out of the house.[4]

The two soon went to the West Virginia State Prison. They attempted to exorcize Blake Morrow at his partners, Luke Master's request. However, the demon inside Blake was too powerful and they were escorted out of the prison when things got physical with the inmate. Kyle became suspicious with his touch impacting all the possessed people. He proposed they visit Mildred again the next day to test if his touch would cause Mildred to react the same way that it did Blake. The Reverend agreed to take him.[5]

The next day, when the Reverend brought Kyle to Mildred's, Mildred reacted harshly to Kyle's touch. The Reverend became concerned that they would be facing forces they wouldn't be powerful enough to face. Upon heading home, he ran into Sidney waiting for him at his house. He found himself unable to react as Sidney stripped off his clothes and marked him with an inverted pentagram. He was told there are forces he is not supposed to know as Sidney leaves him.[6]

The next day, the Reverend stared at his inverted pentagram wound. Kyle stopped by to inform him that Joshua did not react to his touch meaning that he was successfully exorcised. The Reverend is struck by a wave of guilt realizing that all his exorcisms may have been failures.[7]

The next day, the two head to Brian's home. A man he once exorcised. When Kyle touched him and he reacted with black blood being spit from his mouth, the Reverend's suspicions became real that there could be many that he did not truly save. They agree to look for Sherry. The trail leads them to Charleston where the corner her. She reluctantly informs them that Kyle is a source of power for the possessed, they need him even though they hate him. They attempt to exorcise Sherry but she lies comatose after the procedure.[8]

Retrieved from "https://imagecomics.fandom.com/wiki/Reverend_Anderson_(Outcast)?oldid=33986"
Community content is available under CC-BY-SA unless otherwise noted.