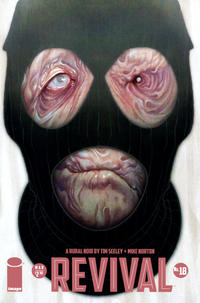 Dana Cypress cleans up her wounds in the bathroom.

Elsewhere, Edmund Holt runs into Wayne Cypress. Wayne knocks a hole in Ed's tire and tells him to have a nice night. Edmund grits his teeth as he clutches his gun tight.

At the University of Wisconsin, Em Cypress wakes up from a dream about her death. She rushes to the bathroom and vomits blood into the toilet.

At the Rothschild Police Department Headquarters, Dana walks in and talks with Bonnie. She tells her she's had some hard times sleeping at night with Cooper complaining about seeing ghosts in the woods. She gets a letter and rushes off.

Lester Majak goes running in the woods with his dog Chuck. When a Creep appears in the woods, Chuck runs off without Lester being able to find him.

At a bowling alley, Randy Decker is interrupted by Dana. She asks him about the man he was examining at the morgue that came back to life.[1] He tells her he was a John Doe and he has no clue who his real identity is. Dana tells him he's potentially implicated as she saw him earlier. Randy tells her the only lead he can give her is some official men in a black van showed up to take him.

At the University, Nithiya Weimar stops by the office to see the damage. She's offered sympathies by the Dean who tells her he hopes Aaron Weimar returns home soon. Em stops by and asks if she's heard from Aaron. Nithiya is furious that she'd approach her as she was sleeping with her husband. Em kisses her real quick and experiences a vision of how Aaron left her a letter before leaving. Nithiya pushes her off and Em leaves.

Later that night Em's eyes glow as blood flows out of them. She wakes up covered in blood.

Cooper wakes Dana up after believing he saw a Creep again. At the same time, Wayne calls Dana to talk with her as he staked out Edmund Holt's home. Edmund Holt sits inside and tells someone over the intercom to keep digging. Cooper runs to bed and cries that his mom can't protect him.

Retrieved from "https://imagecomics.fandom.com/wiki/Revival_Vol_1_18?oldid=53937"
Community content is available under CC-BY-SA unless otherwise noted.