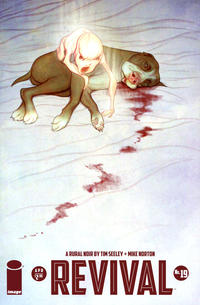 Lester Majak sits in his home and misses his runaway dog, Chuck. When he suddenly sees him outside his window, he rushes to hug him. Chuck's eyes glow and he keels over and spits out a Creep and blood. The Creep enters Lester and shares memories with him before ejecting and running off.

Elsewhere in Merrill, Wayne Cypress approaches Edmund Holt who sits on a deer hunting platform. He tells him he's close to the quarantine zone and crossed the line when he went to the bathroom earlier. He hands him a fine and moves on. Meanwhile, below Holt his people continue to dig.

In Rothschild, Dana Cypress asks Ibrahaim Ramin for help in finding the masked man that attacked her at the University of Wisconsin.[1] When he learns that Em Cypress is also a Reviver, he tells Dana they need to report her. Dana refuses and tells him she's close to solving her murder and just needs a bit more time. She tells Ramin how she was told by her father when growing up she needed to be tough to help take care of Em. Ramin finally agrees to help as he patches up Dana's injuries. He hugs her as he leaves and Derrick Hilch pulls up to see them getting cozy and becomes slightly jealous.

Later at night, Wayne receives a call from Ken Dillisch. He tells him he wants to talk as his wife is tied up in the bathtub next to him.

Em Cypress arrives at the Salvation Army to talk with Jeannie Gorski. She throws up in front of everyone and Jeannie rushes her to the back. Jeannie tells her she's surprised a Reviver can get sick. Jeannie tells her she needs to use her gifts to give back more and God will provide. Em is furious that all she thinks about is God and walks out. She stumbles into a skate park where Rodney, a skater dressed as Jesus, flies over her head as his friend records him wiping out. He friend smacks him in the face with a skateboard and he heals instantly.

Dana pulls over May Tao when she sees she's driving drunk and loosing control of her life. May tells her that she needs money as she gave up the story on her. She then blackmails her about running the story and drives off drunk as she knows she has immunity from Dana.

Later, Dana is called to meet Wayne and Ken Dillisch at the Wausau City Hall. They are introduced to Agents Frederickson and Piug, two FBI members.

Retrieved from "https://imagecomics.fandom.com/wiki/Revival_Vol_1_19?oldid=53938"
Community content is available under CC-BY-SA unless otherwise noted.