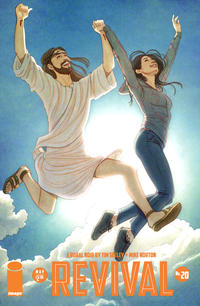 Dana Cypress has a vision of the agents arresting her and knowing everything about the Check murders and their cover up.

She snaps back into reality and Agents Frederickson and Piug tell her about the Checks plan to move dead people's body parts out of the city as people believed eating them would receive eternal life. They then show her a video of a man in New York City who was shot, but then miraculously gets back up. They believe the person may be a Reviver. They are concerned it could be spreading.

Hammond Fisher walks into his daughter's room to find her watching an old, poorly created movie by Edmund Hold. The two girls are making fun of the movie when Hammond and Edmund walk in. They immediately become embarrassed and Hammond asks them to leave and apologize to Edmund.

Later, at Mayor Dillisch's home, Ken Dillisch asks Wayne if he's been completely honest with him. He tells him there's some things that he should tell Wayne. However, before he finishes his comments his wife, Diane Dillisch, walks into the room and cuts her throat open with a ratchet. She spills blood everywhere but then begins healing as a Reviver. Wayne tells Ken he wants to help him with his wife is sick and needs help. Ken becomes agitated and reminds him that he helped keep his drinking off the record when his wife died 15 years ago in an accident.

Em Cypress and Rhodey begin spending time together. He shows her how to feel again as they jump off a bridge to their death. Upon landing, they both laugh as their bodies heal themselves and they can't die.

Later, Dana drives Cooper to his dad's house and tells him she's going to have to go out of town for a few days. Cooper tells her maybe he should just stay there since she's always running off with her new boyfriend. Dana scowls knowing that Derek probably put the thoughts in his head. She heads to Derrick's house and yells at him that he needs to shut his mouth.

In Kronenwetter, Lester Majak heads to the strip bar to meet with an old Navajo friend of his, Wapoose. He asks his friend how he can catch the ghost and kill it.

Brent Gunderson drives Dana to the border where she prepares to head to New York City.

Retrieved from "https://imagecomics.fandom.com/wiki/Revival_Vol_1_20?oldid=53939"
Community content is available under CC-BY-SA unless otherwise noted.