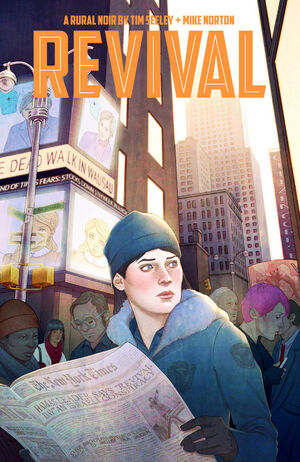 Dana Cypress arrives in New York City. She finds Enrique Piug and they discuss their backgrounds and how Dana is adjusting to the big city. They head to a meat distributor center and find a man has been disemboweled. Piug informs her that his phone records show several calls to the Check home but stopped once they died. The man suddenly bursts into flames and screams oh dollar oh several times. They realize he was cut up as he was a temporary reviver due to eating reviver meat.

Meanwhile at Marathon City, Ibrahaim Ramin is brought to the cell where the Masked Man is locked up. He is informed that he has deep second and third degree burns so he never leaves the soothing tank as it would be unbearable pain if he did. He also sings a song about owls. The man then gives him a card for Rose Black Deer, a tarot reading lady who drugged him and made him spill his guts on the Masked Man.

Em Cypress wakes up in bed with Rhodey Rasch. She smiles as she leaves knowing she had a good time and felt something for the first time in a while.

At the Sheriff's home, Wayne Cypress is approached by Cooper with an incoming phone call. Coop talks to the man about a giant octopus and monsters. The Sheriff answers the phone and tells Coop to go to his room. He tells Edmund Holt on the line to leave his family alone. Coop runs to his room to google the octopus movie and learn more about Edmund.

In Kronenwetter, Lester Majak and Wapoose setup indian dream catchers around Lester's home to catch the ghosts. Wapoose tells him the story of Nanabozho, the creator of the world, and Kitchi-Manitou, the great spirit. When Kitchi-Manitou asked Nanabozho to cross a river without hesitating, and Nana hesitated. Kitchi-Manitou allowed his offspring to be mortal and pass away with old age as punishment. He tells him it's not an act of God, it's an act of man.

Later at night, Dana calls Piug on the phone and they discuss the case. She suddenly peers outside and spots a Creep in the city.

Retrieved from "https://imagecomics.fandom.com/wiki/Revival_Vol_1_21?oldid=53940"
Community content is available under CC-BY-SA unless otherwise noted.