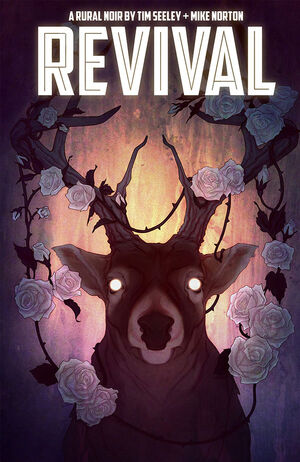 Em Cypress wakes up in Rhodey Rasch's bed and the two make love.

In Kronenwetter, Lester Majak traps a Creep in his indian catchers. He attempts to bludgeon it with a golf club but Wapoose tells him he can't harm it that way.

In New York City, Dana Cypress tells Enrique Piug she can't figure out the last words of "oh dollar oh" from the Polish man. She rubs her eyes and as he vision distorts she realizes ODO could stand for Omega Delta Omega, or a fraternity. Piug tells her there's a secret society on Wall Street called Omega Sigma Omicron. He tells her a Times reporter, Fields, covered them and may have information.

Ibrahaim Ramin heads to the Tarot Card reader's location. Rose Black Deer ermeges and welcomes him. After she begins reading his palm lines, he begins to hallucinate and tell her all about the CDC center in Marathon City the same way his CDC friend did earlier.[1] She orders him to leave and forget about his troubles.

Dana and Piug arrive outside John Fields' home. Dana heads around back to make sure he doesn't try and escape via the fire escape. However, his body flied down and lands on his vehicle. He suddenly self-immolates the same way the polish man did at the distributor center. She gets out of her vehicle to see Anders Hine climbing down the fire escape. A Creep suddenly jumps down to chase Hine. It passes through Dana and she passes out from the experience.

In Wausau, Rhodey shows Em sexual self-mutilation videos he's been creating. She finds it disgusting and pukes blood. She runs away when he shows her he's video tapped their intimate sexual moments.

In Marathon City, Ramin calls someone on the phone and self-reports about his experience with the fortune teller. He admits he may have told them the location of Location One. The voice informs Ramin that there will be repercussions and they will take care of it.

Wayne Cypress heads to Cooper's school when he didn't come home. He spots a picture of the gigantic octopus and realizes he's heading to Edmund Holt's home.

At the Mount Argus Hotel, the group is fascinated to see Anders Hine has donated his body to be eaten by them. The group gather around the dinner table and prepare to eat.

Retrieved from "https://imagecomics.fandom.com/wiki/Revival_Vol_1_22?oldid=53941"
Community content is available under CC-BY-SA unless otherwise noted.