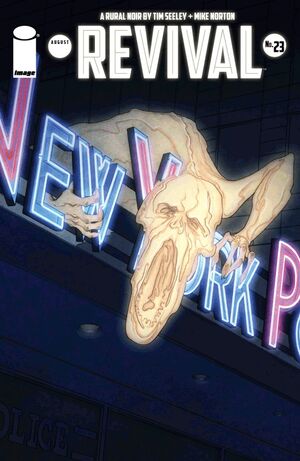 Em Cypress wakes up in the fetal position on the shower floor with blood running down the drain. She receives a phone call from her dad but drops the phone and passes out on the floor. She later wakes up and finds a Creep inside her and she realizes she's pregnant.

Cooper Cypress wanders through the woods attempting to find Edmund Holt's home so he can see his gigantic squid prop from when he made movies. When he spots a Creep, he runs through the woods and looses his backpack to a tree branch that snags it as he runs by. May Tao arrives and offers to help Coop. They sit in the car for a period of time as May is too drunk to drive.

Wayne Cypress arrives at Edmund's home and belligerently demands to know where his grandson is located. When Edmund doesn't know, he becomes frustrated and burns his house to the ground with gasoline. As he walks away, he receives a call from May that Cooper is safe. Underneath, a group of people continue to dig an underground route.

In New York City, Enrique Piug and Dana Cypress arrive at the Mount Argus Hotel. They order Frederickson to cover the back in case if anyone attempts to escape. Inside, Anders Hine here's the emergency vehicles arrive and wakes up as the dinner guests crowd around him to eat his flesh. Dana chases him up to the rooftop. He tells her he's poisoned his body and is not healing as fast as he once did. He let the rich dinner party eat him because he is so utterly sick with people who feel like they deserve something such as his kids who killed him for insurance money. Inside, Piug calls down to Frederickson as all the house guests become sick and vomit from the poisoned meat. On the rooftop, Anders explained he worked through the Black Market with the Checks to make sure his "product" made it's way out of Wausau. He kisses Dana to find out the truth of what happened to the Checks. He laughs as he discovers she's hiding the truth of her sister being a Reviver and how she know the truth of how the Checks died. He asks if Em is haunted by the ghosts the same way he is. He's recently spotted one following him in Brooklyn, New York and knows they are connected to him, not Wausau. Rather than let him go, Dana blows out Anders knee caps. She lets the Creep enter his body and self-immolate.

In Kronenwetter, Lester Majak partakes in a ceremony on the captures Creep with Wompoose. He later cries after killing the baby Creep.

May returns to Ministry Saint Clare's Hospital. She tells Blaine Able she's willing to forgive him, even after everything he's done to her.

In Marathon City, Rain is told by his CDC contact that the woman who hypnotized him has just appeared dead. He pulls out a slate and reveals Rose Black Deer.

Retrieved from "https://imagecomics.fandom.com/wiki/Revival_Vol_1_23?oldid=53943"
Community content is available under CC-BY-SA unless otherwise noted.