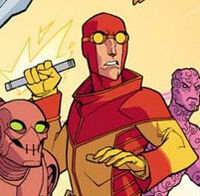 After committing theft, Rex attempts to escape from his pursuers which include a store clerk and the police. After he gets into an alley, he is hit with a concussion grenade. A man reveals himself to Rex asking him why if Rex believed it was wrong to steal. Rex replies with him saying that he must steal to eat. The man responds by asking if his parents know if he's stealing, with the latter responding who do you think sent me. He arrived to home for his father to complain that he wasn't able to get something heartier. Their conversation is cut short by the entrance of the same man that had met Rex in the alley. Bringing food, this man revealed himself to be named Radcliffe, a government personnel. He brings a suitcase and offers Rex's parents a large sum of money in exchange for Rex. Rex's father hastily agrees to the offer and Rex goes with Radcliffe to his new home. Rex would train daily doing acrobatic & combat exercises. He would also receive injections to enhance himself. He would then prep for a surgery give him his power. The surgery would be a success and a robot would explain to Rex how his powers would work. Radcliffe would then send Rex on several jobs committing theft, assassination, & arson. Radcliffe would then give him a mission to destroy the Pentagon. On his way to the Pentagon, he would encounter Atom Eve, after she had stopped an attempted burglary. At first, he was going to attack her, but decided not to. Asking for her help, he states that he is questioning the morals of his boss, Director Radcliffe. They stop Atom Eve's villain, Killcannon and they head to Eve's house.

The next morning, Rex heads to the pentagon and leaves a note for Eve. He decides to not destroy the Pentagon, leaving a note for Cecil Stedman. He heads back to his apartment and begins to move out. He stops by to look at a wall of photos only to be interrupted an upset Radcliffe. Noticing that he didn't do his mission, he yells at Rex and slaps him. Radcliffe reminds him of everything he's done for him. Radcliffe grabs his neck and lectures him. Wishing to stop him, Rex shoves Radcliffe's face and touches his glasses, charging it with potential energy. Not knowing he did, he warns Radcliffe not to touch his glasses, but he does so anyway. The glasses causes an explosion, making his head explode. Thinking fast, he destroys the facility, hoping to leave no evidence of its existence.

He leaves to Eve's house and tells her about it. Eve comforts him and asks him if he blew up the facility. They head back, hoping for assurance. They notice that Steven Erickson, the head of the government that experimented on Eve, is leading the salvaging team. Eve gives Rex a costume and interrupt the salvaging. Erickson notices them and they attack the duo. Eve draws their fire and Rex goes to explode objects. They regroup and Rex ignites a pipe under the facility. They are interrupted by Erickson, asking Rex to join him. Rex refuses, saying all he needs is Eve. He grabs Eve and the facility explodes. They kiss as they shield themselves from the blast, marking their intimate relationship. They escape and head to Tailor, Inc., a known store where costumed heroes receive their clothing. Rex receives a new costume. Eve storms out after a comment Rex made. Eve then reveals that Erickson's role in Eve's life. She states that she accidentally erased his memories.

Around Christmas time, Rex begins to start looking for his old family. While Eve leaves to talk to her parents, Rex goes to his parent's location. He lights a rock, attempting to kill them. Noticing that they are happy and they have two children together, he decides not to do it. Eve flies to his location and they leave the location. Months later, they interrupt a Lizard League operation, kindling their team mate relationship.

Joining the Guardians Of The Globe

Rex would see Eve again wishing to talk to her. Angry, she leaves. His first mission as a new member would be to fend off an invasion by the Flaxans. After Eve is zapped by one of the weapons, Rex catches her, much to her dismay. After Invincible destroy their wristband that prevent them from aging, Rex throws BBs and they retreat. Rex would assist and stopping another alien invasion against another unnamed alien race. The battle stops after they had retreated back.

Rex and the Guardians of the Globe would interrupt Titan's takeover of Machine Head's corporation. He would battle Kursk with Dupli-Kate before until Battle Beast nearly kills Black Samson and Bulletproof. He would later arrive to the scene where Angstrom Levy caused an explosion by stopping his mind transfer process. He would later battle a mutuated man named Octoboss with Invincible. They easily defeat him and Invincible flies Rex to a Guardian base. He notices Monster Girl arriving after her battle. He talks with Monster Girl asking where Kate was. It is revealed that Kate had an affair with The Immortal and Rex saw it, similar how she did with Rex. He talks to Robot with him comforting him about the situation. Robot puts his hand on his shoulder, with Rex in pain.It would later be revealed that Robot took some of Rex's DNA to use for cloning him to mind transfer himself.

Rex and the Guardians would fend off a world takeover by a villain named Omnipotus. They would attack with no effect on him. Omnipotus would knock Rex into the air with Eve arriving to the scene. She notes her arrival is because of end of his relationship with Kate. The battle ends with the arrival of Black Samson, recovering from his near death experience.

Rex would fight a villain by the name of Mastermind, a villain with the power to control minds. He and the others are overwhelmed until Invincible arrives to stop him. Rex would appear in the Guardians of The Globe locker room. He discusses Dupli-Kate marrying The Immortal with Bulletproof. He goes on to say that Dupli-Kate never talks and all she likes is sex. Bulletproof reminds him that isn't that what he like about her. Rex would go to say that Eve is more marriage material than Kate. Rex would then assist in stopping Doctor Seismic from escaping prison. They succeed with a new hero arriving on the scene named Shapesmith. They go to the base to celebrate's Immortal and Kate's marriage. Rex would congratulate them with Kate thanking him, mentioning that they would be still be together if he was more like that. Rex would assist in many other Guardian jobs and even help Invincible when he Cecil attempted to stop Invincible.

Rex would answer to the call after evil versions of Invincible had arrived. Rex is beaten by one of them and Rex asks the last of them to leave. Determined to stop one of the evil Invincibles, Rex uses his power and fills his skeleton with potential energy, turning himself into a bomb. The explosion causes the Invincible's death and his own.

After touching a white light, Mark was transported back in time. He found himself in his body before he received his powers and with all his memories.[2]

Atom was soon approached by Mark at school. He asked her about the Teen Team. She hadn't met him before and was shocked he knew about her secret identity and super-powered team. She dragged him to meet with the Rex, Robot, and Kate. They were all in disbelief that he knew so much about them yet they had never met him before. Over the next week, he told them how to defeat all their future battles with David Hiles, the invading Flaxans, and Maulers.[2]

Rex and the Teen Team continued to aid Mark in saving countless lives over the next few days. Whenever Mark got too close to Eve, Rex reminded him that she was with him.[3]

Retrieved from "https://imagecomics.fandom.com/wiki/Rex_Sloan?oldid=63806"
Community content is available under CC-BY-SA unless otherwise noted.