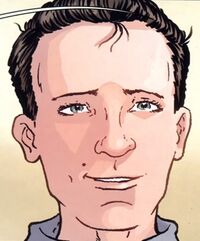 As a young boy, Feynman was taught by his father he needed to learn standards and dedication.[1]

He grew up to become one of the most disciplined american physicists and was subsequently hired to work on the Manhattan Project. Feynman was intelligent enough to quickly decipher the alien technology on the Gateway. He helped activate it to send the Conquistidori into outer space.[2]

This character is a fictional representation of Richard Feynman, a real person. More information on this person can be found at Wikipedia.org.

Retrieved from "https://imagecomics.fandom.com/wiki/Richard_Feynman_(The_Manhattan_Projects)?oldid=25475"
Community content is available under CC-BY-SA unless otherwise noted.