Start a Wiki
The Fury 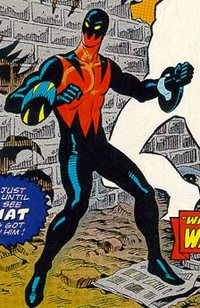 The Fury is the son and former sidekick (known as Fireball) of deceased adventurer The Fightin' Fury. While confronting The Sinister Squid, the Fightin' Fury leapt in front of a gun-blast meant for his son. As he lay dying, he asked Richard to make a promise to put The Squid and others like him where they belong. Thus was born The Fury.

Retrieved from "https://imagecomics.fandom.com/wiki/Richard_Judge?oldid=65615"
Community content is available under CC-BY-SA unless otherwise noted.