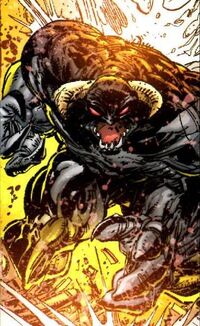 Richard Massullo was a mobster who wished to put his life of crime and violence behind him and raise his family. Unfortunately, His employer Tony Twist had other plans. Massullo was forced to undergo horrible experiments that turned him into a hideous mutant-cyborg.

When Richard escaped, Twistelli had his wife and baby murdered. Having nothing to live for but revenge he tried to blackmail Spawn into helping him. Spawn sympathized for him and gave Massullo a dossier filled with juicy info on Twistelli.[1]

After learning that his brother was still alive, Tremor convinced Spawn into helping him rescue David from Tony Twist. Upon raiding the house, Richard was surprised to find David Massullo working for Twist and shooting at him. David refused to acknowledge he was truly his brother as his brother died several years ago. Richard was shot several times in the arms. Spawn suddenly arrived and broke his brother's arms and legs to send a message to Twist. He tells Twist to leave his family alone or else. Richard is shocked as he thought Spawn was helping him, but doesn't have time to attack Spawn as he needs to rush David to the hospital. Tremor tells Spawn he'll kill him for his treachery.[2]

Tremor remained out of the spotlight for a long while, but has recently joined a new version of The Brigade