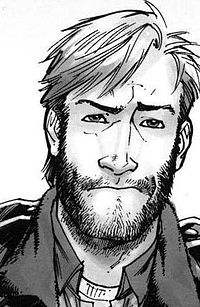 Police deputy Rick Grimes was born and raised in Cynthiana, Kentucky. At the age of 29, Rick was shot in the line of fire by a unnamed criminal. He was placed in a coma for a month's time.

Beginning of the Apocalypse

Rick is soon reunited with his family who have taken refuge in a small base camp outside of Atlanta as well as his buddy Shane. Rick quickly takes charge of the group due to his police background decides to leave the camp after a walker attack, and Shane trying to kill him.

On the road he meets Tyreese who he quickly befriends together the new group searches for a place to call home. They think they've found a place in a suburban neighborhood but it turned out to be infested with walkers.

Rick and his group end up in Hershel's farm after Carl gets shot. Hershel Greene the man who owns the farm takes them in, but turns out is hiding walkers in his barn. This causes conflict between him and Rick which leads to them leaving.

Rick finds an abandoned prison which is where he and his group would live for a long while. Rick discovers that Lori is pregnant and the baby might be Shane's. In the prison rick goes a bit crazy after the horror's witnessed inside, after a fight with Tyreese the group demotes Rick from leader.

Rick leaves the prison with friend Glenn and newcomer Michonne the discover Woodbury a town being run by a mad man named The Governor. After capturing them The governor cuts off Rick's hand to set an example. Luckily the group is able to escape, but the governor follow them.

The Governor sets all out war on the prison group twice, at first most of his men are shot out by Andrea but the second time he is able to infiltrate and kill half of the prison group including Lori and the newborn baby Judith.

Rick is all alone with just Carl who despises his father for not being able to save Lori, Judith and the rest of the Prison group. Rick and his son are able to path up after finding the remaining members of the group who have reformed at Hershel's Farm. A new group comes on an Army truck lead by Abraham Who are going to Washington D.C., Rick's Group follows them hoping to find a better life there. On the way their Rick bonds with Abraham after they clashed on their first meeting. The group then comes across cannibals who try to kill of each member one by one, Rick and the gang brutally murder them after they ate Dale's Leg.

After a long travel there the group finds a big group of survivors in a safe zone called Alexandria. It takes the group a while to get used to living "normal" life again. Rick attacks a man who he learns beat his wife and causes him to become unpopular with the rest of the group. Rick manages to take over Alexandria and try's to make them more tough and able to defeat potential threats like the governor. A horde of Walkers invade Alexandria which causes the death of Rick's new girl friend Jessie and her son Ron In the chaos Carl get's his eye shot out, which causes Rick to go into a panic as he tries to kill as many walkers as he can. The rest of the group seeing this helps him as they make easy work of the horde.

After taking control of Alexandria, Rick discovers other groups in the area known as Hilltop. Rick makes a deal with Hilltop in exchange for supplies that he would take on a group called the Saviors that had been tormenting them.

Rick and his gang successfully take out a group of saviors, but this causes them to come face to face with their leader Negan. Negan isn't happy that they killed his men so in return he kills Glenn with his baseball bat Lucille. Rick decides to plan against Negan by teaming up with the other groups that being Hilltop and The Kingdom run by Ezekiel

Alexandria and the other groups fights Negan's saviors, and after many bloody battles the war ends with Rick stabbing Negan, but he saves his life in order to set an example on how the new world should work. He locks Negan up for life.

Four years after the war the four groups all live in harmony with a new form of government set in place which is ruled by each individual from their group.

Rick comes into conflict with a group called the Whisperer's who want to take control of their Land. After many more conflicts they go to war which ends with Rick's group being victorious. Unfortunately during the battle Rick's new wife Andrea gets bit and he has to put her down.

Retrieved from "https://imagecomics.fandom.com/wiki/Rick_Grimes_(The_Walking_Dead)?oldid=65529"
Community content is available under CC-BY-SA unless otherwise noted.