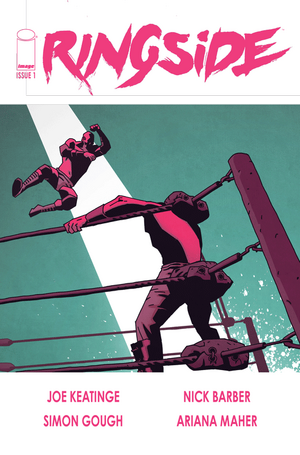 Watch yourself. Trust me. Go full bore on this business without any life on the side and you'll burn out real quick.

In Japan at a wrestling training facility, Keita talks to an experienced wrestler and attempts to convince him to train the new guys. The man tells Keita his trip to Japan isn't for 'business.' Keita doesn't believe him and hands him a magazine with 'Minotaur' on the cover, his old wrestling avatar. He picks it up but quickly puts it down saying he doesn't keep those things around anymore.

Elsewhere in the United States of America, Ragen breaks into the producer room during a wrestling match. He's furious they're canceling a match with Crasher and Reynolds. The cameraman tells him the orders came from up top. Ragen is then shocked that they are sending in Crasher when he isn't supposed to be on stage. The cameraman tells him the show must go on and that he should be used to changes the day of as a creative writer.

In the locker room, Reynolds is upset he's not out there fighting. Another man tells him he doesn't know the definition of gypped yet. He suddenly receives a phone call from Dan Knossos. He picks up and Dan asks him for a ride home from the San Fran airport. The man is shocked he'd be back from Japan so early as it seemed like a good gig for him. Dan tells him he turned it down and he's set for a while, he just wanted to chat with him for a bit. Dan tells him he just wanted to tie up some loose ends.

Dan leaves the airport and is picked up by Andre Aligreti. Andre takes him to his office in Oakland, a bail bonds office, to show him his business plans. He shows him he made up 'Minotaur' as his sponsor and asks Dan if he'll show up and do some signings for him. Dan becomes angry and tells him he doesn't own the rights to Minotaur or anything of the sort and they'll end up being sued. Andre drops him off at Amy's house. Amy asks what brings him back in town. Dan levels with her and tells her Teddy is in trouble.

Later at a diner, Dan walks in and meets with Reynolds and Davis. Davis tells him it's been hard as creative only gives gigs to people who sell t-shirts. As a result, they do house shows and mostly just train the new guys. Dan tells them he's also been only training people in Japan. Dan tells the kid to save his money and make sure he keeps his personal life up, or he will burn out. Davis and Reynolds take off for the next gig.

Danny heads to a local bar where he catches a drink by himself. A man walks in and recognizes him. He asks if he was there to meet Teddy. Dan replies that he was meeting Teddy at the bar. The man tells him Teddy isn't doing well and he's been taking care of him for a while. He introduces himself as Eduard and asks him to come follow him to the back so they can talk. As he walks out, he's hit in the face with a wrench. Dan attempts to fight back but Eduard drops the nice guy act and orders him to stop resisting. He tells him he's going to book a flight back to Japan and forget all about their 'mutual friend.'

After he's thoroughly roughed up, Dan returns to Amy's house. He heads to her basement where she has hundreds of automatic weapons. He tells her he needs it to start cleaning up.

THE PROFESSIONAL WRESTLING EPIC BEGINS IN AN OVER-SIZED FIRST ISSUE! RINGSIDE is an ongoing series set within the world of professional wrestling, written by JOE KEATINGE (SHUTTER, GLORY, TECH JACKET) and drawn by acclaimed illustrator NICK BARBER, combining the ensemble drama of THE WALKING DEAD with interconnected rotating perspectives akin to The Wire. Each issue will explore the relationship between art and industry from the view of the wrestlers themselves, the creatives they work with, the suits in charge and the fans cheering them all on. But that's just the beginning. The real violence is outside the ring.

Retrieved from "https://imagecomics.fandom.com/wiki/Ringside_Vol_1_1?oldid=53921"
Community content is available under CC-BY-SA unless otherwise noted.