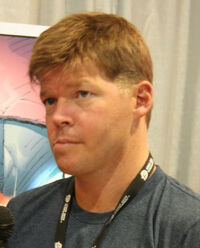 In the early 1990s, self-taught artist Liefeld became prominent due to his work on Marvel Comics' The New Mutants and later X-Force. In 1992, he and several other popular Marvel illustrators left the company to found Image Comics, which rode the wave of comic books owned by their creators rather than by publishers. The first book published by Image Comics was Rob Liefeld's Youngblood #1. A prominent artist in the 1990s, he has since become a controversial figure in the medium.

In 1988, at the age of 20, Liefeld completed his first significant published work, as penciller for DC Comics' Hawk and Dove limited series by Barbara and Karl Kesel, who also provided inks. Liefeld's layouts were oriented sideways in story pages featuring a chaos dimension that the characters enter, so that a reader would have to turn the comic book at a right angle in order to read them. Because this was done without editorial input, Editor Mike Carlin cut and pasted the panels into the proper order, and Kesel lightboxed them onto DC comics paper to ink them. The letters column of Hawk and Dove #5 mentions that Liefeld "showed something new to an editor who thought he’d seen everything." According to Kesel, Liefeld became late on deadlines and increasingly forgot to draw hands and feet.[1]

Liefeld moved to Marvel, where in 1989 he became the penciller for The New Mutants, starting with issue #86, starring a junior team of X-Men. He is credited with creating a new leader for the team — the heavily-muscled, heavily-armed, glowing-eyed cyborg Cable, who instantly became a popular anti-hero. However, the prototype for Cable, tentatively named "Commander X", was initially devised by Marvel editorial staff, with Liefeld developing character designs from the assigned script. Liefeld also created the wise-cracking assassin Deadpool and a group of immortal mutants called the Externals. Both were popular but prompted charges of plagiarism as fans debated similarities between Deadpool and DC's Deathstroke the Terminator, and between the Externals and the immortals from Highlander.

Liefeld's relationship with Marvel began to break down in 1991 when he announced plans in a black-and-white advertisement in CBG[issue # needed] to publish an original title, dubbed "The Executioners", with competitor Malibu Comics. Faced with the threat of trademark litigation from Marvel, Liefeld scrapped the title and later on re-introduced the characters in the Image title The Berserkers in 1995.

Liefeld and several other popular young artists including Jim Lee, Todd McFarlane, Erik Larsen, Jim Valentino and Marc Silvestri left Marvel in 1992 to form Image Comics in a migration dubbed by fans as "the X-Odus" since many of these artists had worked on X-Men related titles for Marvel. Each co-founder formed his own studio under the Image banner, such as Liefeld's Extreme Studios. Liefeld's superhero team series Youngblood, which is loosely based on a 1991 Team Titans series Liefeld had proposed to DC Comics, was the first comic Image published.[2] Extreme Studios comics contained elements that became Image stereotypes: huge muscles, breasts, and guns. However, Youngblood immediately began to suffer from delayed publication dates and major changes in direction. Critical approval of these characters was scarce, and while Liefeld's wholesale sales to comic books dealers were strong, sales to consumers, especially of secondary titles from Extreme and Maximum Press, were not as spectular.

In 1996, Liefeld's and Lee's studios signed with Marvel to re-envision several of the company's core series, an event called "Heroes Reborn". Liefeld was contracted to write 12 issues of The Avengers, co-written with Jeph Loeb, and was to pencil 12 issues of Captain America. However, he failed to meet the publishing schedule and his overall output met with a less-than enthusiastic response,[3] failing to reach the sales targets required in his agreement with Marvel, although Loeb noted in Wizard Magazine that their run on Captain America had three times the sales of issues prior to their run. Marvel terminated the agreement after six issues,[3] and Marvel re-assigned the balance of the two series to Lee's studio.

In 1996, Liefeld left Image Comics, after acrimonious disputes with his partners led Marc Silvestri and Top Cow to temporarily break away from Image. The comics press variously reported several underlying issues: the effect of Liefeld's erratically published and critically derided lines on the company's reputation, his supposed misuse of his position as Image CEO to unfairly benefit his own publishing efforts (including Maximum Press, which was not a part of Image) and attempts to recruit artists employed by his Image partners, a violation of their informal agreements. As further financial reverses followed, Liefeld moved all of his publishing ventures into a new company, Awesome Comics. This new enterprise, announced in April 1997 as a partnership between Liefeld and Malibu Comics founder Scott Mitchell Rosenberg, concentrated its efforts on newer properties.

At Awesome, Liefeld and Loeb attempted to resurrect their unused Captain America plots for a new character, Agent America. This character was nearly identical in appearance and background to Captain America. Under legal pressure from Marvel, Liefeld scrapped Agent America and acquired the rights to Jack Kirby and Joe Simon's Fighting American, updating the design. Rob was allowed to publish the book, but legally this new character could not throw his shield, one of Captain America's trademarks.

Meanwhile, Liefeld hired acclaimed comic book writer Alan Moore to revive many of his creations, which had declined in popularity. Moore wrote a few issues of Youngblood and Glory, but his most lauded work for Liefeld was on Supreme, which played on the character's more generic traits in a clear tribute to the Mort Weisinger-era Superman.

Awesome's initial releases, including entirely new properties like Kaboom! created by Jeff Matsuda, were generally received more favorably by critics than the Extreme and Maximum lines had been. However, Awesome soon collapsed under the burdens of disputes among its partners, and an abrupt departure of its primary investor.

In the 2000s, Liefeld returned to his former characters in the X-Men franchise, providing pencils for the occasional cover and/or interior of Cable and X-Force. These books had continued to be somewhat popular properties until the early 2000s, when both were cancelled.

In 2004, he reunited with Fabian Nicieza for an X-Force limited series and illustrated the early covers for Nicieza's Cable and Deadpool. In that same year, Liefeld formed Arcade Comics and once again announced plans to revive Youngblood.

Liefeld's new website was launched in May 2005. In August 2005, his first assignment for DC in many years began, a two-issue arc on Teen Titans with writer Gail Simone. Orders for his first issue increased more than 10% over the July issue, moving the book into the Diamond top 20. The second issue of the arc dropped in orders to a point almost 5% below what issues of the series before Liefeld's were solicited.

Recently it was announced that Liefeld will be returning to the Heroes Reborn Universe with writer Jeph Loeb. The Project is named "Onslaught Reborn" and will be released as a 5 part monthly title starting in November of 2006. A substantial amount of the proceeds from this comic series will benefit the Sam Loeb Scholarship Fund.

Grant Morrison and a group of artists decided to parody Liefeld's artistic styles and popularity with a Doom Patrol special called Doom Force. This both parodied Liefeld's art style as well as the general angst of X-Men comics. Also of note is that Morrison had Jill Thompson illustrate a scene in The Invisibles in a Liefeld style.

Herb Trimpe, a staff artist at Marvel Comics, most notably known for his work on The Incredible Hulk, in the 1990s, under pressure from Marvel, adopted many elements of Liefeld's style, including Liefeld's exaggeration of anatomy. Critics reviewing those works felt that Trimpe ended up copying all of Liefeld's artistic weaknesses without copying those elements that appealed to Liefeld's fans.

Retrieved from "https://imagecomics.fandom.com/wiki/Rob_Liefeld?oldid=62273"
Community content is available under CC-BY-SA unless otherwise noted.